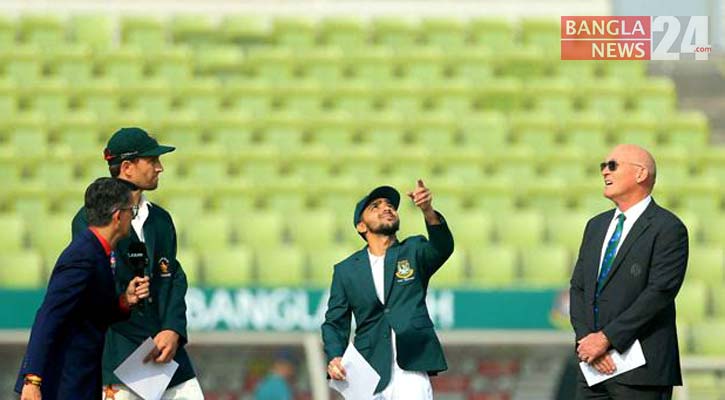 Zimbabwe stand-in captain Craig Ervine won the toss and elected to bat first against host Bangladesh in the one-off Test at Sher-e- Bangla National Cricket Stadium in Dhaka on Saturday.

Bangladesh who is on six-match losing streak, brought up two changes from the last Test against Pakistan in which they lost by an innings and 44-run margin.

Bangladesh, in fact, lost the five matches out of six by innings margin.

They got the Mushfiqur Rahim-boost as the most dependable batsman came back to the squad after missing the Rawalpindi Test. He opted against touring Pakistan, citing security concerns.

Mushfiqur Rahim is the most experienced batsman in Bangladesh’s middle order following the axe of Mahmudullah Riyad, who threw away his wicket in the last two Test matches against India and Pakistan in horrible fashion.

Off-spinner Nayeem Hasan also made the cut in the final XI, replacing Rubel Hossain who was the part of Bangladesh’s last Test.

Zimbabwe’s regular captain Sean Williams has already opted out this Test as he decided to be with his ailing wife.

The Southern African nation showed an unwavering resolve against Sri Lanka in two-match home Test series, before losing it by 1-0.

They have made three changes from that series with Sean Williams, Tinotenda Mutumbodzi and Carl Mumba missing out while Timycen Maruma, Ainsley Ndlovu and Charlton Tshuma replaced those three players.