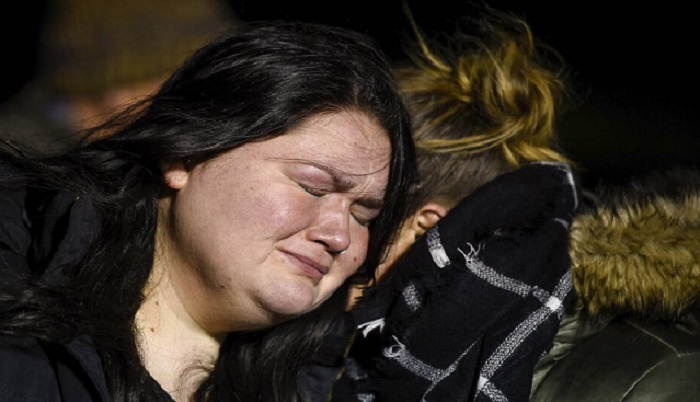 A convicted murderer was put to death in Tennessee's electric chair Thursday, becoming the state's fifth prisoner over 16 months to choose electrocution over the state's preferred method of lethal injection.

Nicholas Sutton, 58, was pronounced dead at 7:26 pm at the Riverbend Maximum Security Institution in Nashville.

Asked if he had any last words, Sutton looked directly into the witness room and spoke clearly.

"I would like to thank my wife for being such a good witness to the Lord, and my family and many friends who loved and supported me and tried so very hard to save my life," Sutton said.

He also spoke of his Christian faith, saying that Jesus Christ had "fixed him." He added, "I'm just grateful to be a servant of God, and I'm looking forward to being in his presence."

Sutton was sentenced to death in 1986 for killing fellow inmate Carl Estep in a conflict over a drug deal while both were incarcerated in an East Tennessee prison, where Sutton had been serving time for the killings of his grandmother and two others when he was 18.

No family members of either Sutton or his victims witnessed the execution. Tennessee Department of Correction spokeswoman Dorinda Carter told reporters that Sutton had asked his family not to be present.

Only relatives of Sutton's last victim, for whose murder he was sentenced to death, were allowed to witness the execution. None did. However, the sister of one of Sutton's earlier victims, John Large, was present in the prison.

After the execution, Carter read a statement from Amy Large Cook that said, in part: "John was denied the opportunity to live a full life with a family of his own. My children were denied meeting a wonderful man who would have spoiled them rotten and loved them with all his heart. He suffered a terrible and horrific death, and for that I will never forgive Sutton."

Sutton's supporters, including several family members of his victims and prison workers, had recently asked Gov. Bill Lee to commute the sentence, saying Sutton had rehabilitated himself in prison and was not the same person who first entered prison 40 years ago. His supporters included two prison workers who credited Sutton with saving their lives.

Retired Correction Lt. Tony Eden had stated in an affidavit included with Sutton's clemency petition that Sutton confronted a group of armed inmates during a prison riot in 1985 and helped get Eden to safety.

"If Nick Sutton was released tomorrow, I would welcome him into my home and invite him to be my neighbor," Eden wrote.

But Lee said Wednesday that he would not intervene to stop the execution. And two last-ditch appeals to the US Supreme Court were denied Thursday evening. The justices, in an emailed statement, gave no explanation for their decision.

Sutton had not indicated why he chose electrocution — an option for inmates whose crimes were committed before the state adopted lethal injection as its preferred execution method — but other inmates have said they thought the electric chair would be quicker and less painful.

In the death chamber after Sutton's last words, officers placed a large wet sponge on his head and a cap over it. They then attached to the cap a black shroud that covered Sutton's face. At 7:18 p.m. two jolts of electricity, with a pause in between, were delivered to his body, which stiffened and partially lifted out of the chair as his hands balled up. It was over in just under a minute.

Expert witnesses testifying in 2018 on behalf of Tennessee inmates challenging the state's three-drug lethal injection protocol said the mix of drugs would cause sensations of drowning, suffocation and chemical burning while rendering the inmates unable to move or call out.

Inmates' attorneys have argued without success that both lethal injection and electrocution violate the Constitution's ban on cruel and unusual punishment.

The electric chair fell out of favor in the 1990s following several gruesomely botched executions, including a Florida execution in which smoke and flames shot from the head of the condemned inmate. Only one other state, Virginia, has used electrocution in recent years, and it has not done so since 2013.

During Tennessee's last electrocution in December, witnesses said they saw smoke or steam coming from the side of inmate Lee Hall's head. But witnesses on Thursday said they saw nothing unusual.