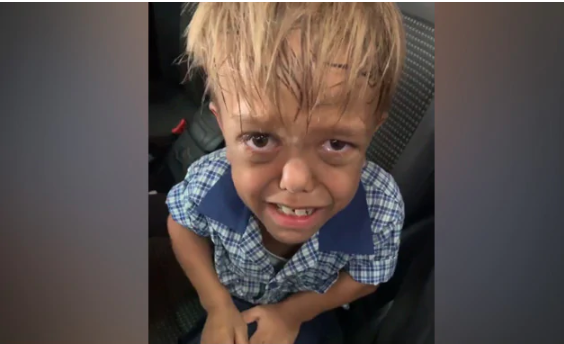 A woman in Australia has shared a heartbreaking video of her young son crying and saying he wants to kill himself because of the constant bullying he faces at school because of his height. In a powerful video, the mother has sent out a message on the impact bullying has on children.

Yarraka Bayles had picked up Quaden, her nine-year-old son, from his school in Brisbane on Wednesday. In the video on Facebook, the boy, who appears to have Dwarfism, is in his school uniform and is seen leaning on the car seat. He sobs uncontrollably as he says, "Give me a rope, I'm going to kill myself."

"I've just picked up my son from school, witnessed a bullying episode, rang the principal, and I want people (to) know, parents, educators teachers, this is the effects that bullying has, this is what bullying does," Ms Bayles says as her son looks up her, helplessly.

"I just want to stab myself in the heart. I want someone to kill me," Quaden says in the 6:46 minute-long video.

Quaden's mother said she spotted a student patting him on his head and making fun of his height. "He ran to his car in hysterics because he doesn't want me to make a scene at the school. I feel like I'm failing as a parent. I feel like the education system is failing," Ms Bayles says.

She appeals to other parents and schools to educate children on the serious consequences of bullying, which may, like in her son's case, even make them suicidal.

"This is the impact bullying has on a nine-year-old that just wants to go to school, get an education, have fun.  Every single day, something happens...another episode, another bullying, another name-calling... . Is there any advise or any support or anyting that other parents or families have done to raise disability awareness within the school so that this kind of thing doesn't happen?" she asks.
"I want people to know how much it's hurting us as a family. I want people to educate their children," the mother says.

Quaden has received an outpouring of support since his video was shared by his mother. With over 15 million views, the clip has been by over 2.85 lakh Facebook users, many of them using the hashtag #TeamQuaden. Australia's National Rugby League (NRL) members were among those who showed solidarity with the nine-year-old and his mother.

Hollywood actor Hugh Jackman posted a heartfelt video on his Twitter and captioned it "You've got a friend in me". In the video he says, "Bullying is not OK. Period."