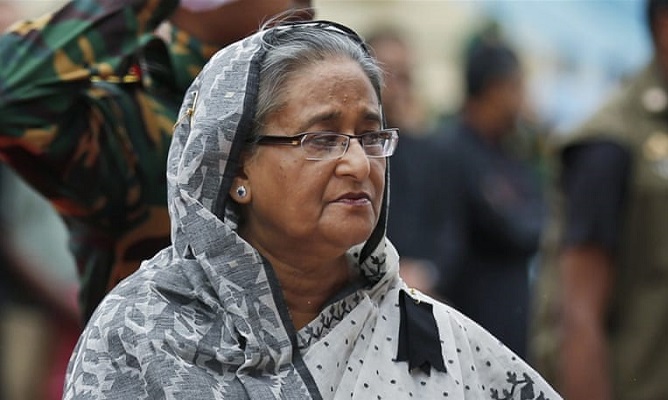 Prime Minister Sheikh Hasina on Friday said in the global village one needs to learn other languages but the mother tongue must never be neglected.

"The world is now a global village. To live here, to communicate with others, doing business, knowing about other cultures and literature, one needs to learn different languages but not by excluding the mother tongue," she said.

She heavily criticised a section of young generation who cannot speak Bangla properly.

"Many of us are forgetting Bangla while staying in Bangladesh. They cannot speak Bangla with proper Bengali pronunciation, they speak Bangla in English accent, what’ll I say to them? I can only pity them," she said.

Talking about the Pakistani conspiracy to exclude Bangla from the life of Bangalees, Sheikh Hasina said it was a blow to the existence of the whole nation.

"We’ve achieved Independence depending on that movement (Language Movement). This is the reality," she said.

She mentioned Bangabandhu had said that the blow to Bangla made him determined not to stay with Pakistani anymore and that there should be another country for the Bangla spoken people.

"He launched every movement and every step of his life keeping that in mind," she said.

Focusing on the history of the Language Movement, Sheikh Hasina said although the February 21, 1952 saw the tragic incident, the movement for mother language began much earlier.

At the proposal of Bangabandhu, she said, the State Language Action Council was formed comprising Chhatra League, Tamuddin Majlish and other student organisations in 1948.

This Action Council had called for a general strike on March 11, 1948 across the country. On that day Bangabandhu was arrested, she said.

The Prime Minister said that she wanted to form a Trust Fund under the International Mother Language Institute where the government will provide fund as seed money.

"From the interest of the seed money, the institute will give fellowship to students for learning languages. Learning language is very important," she said.

She also said that the institute will decide which languages they will teach here.

Earlier, the prime minister unveiled the mural of Father of the Nation at the International Mother Language Institute. She also unveiled some publications at the programme.

After the inaugural programme, the Prime Minister visited the office of the National Committee for celebrating the birth centenary of the Father of the Nation Bangabandhu Sheikh Mujibur Rahman at the institute.