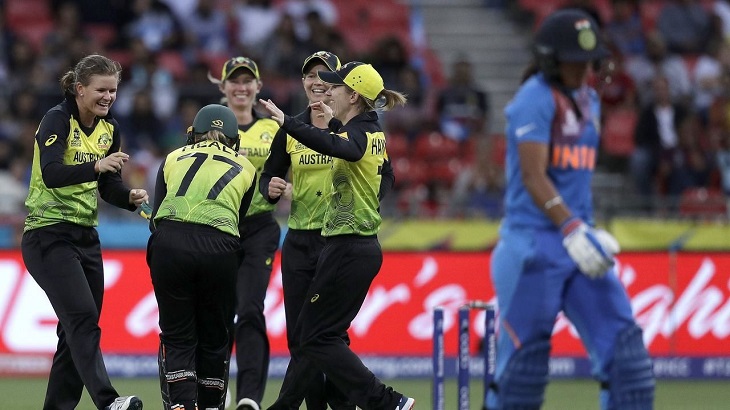 Deepti Sharma made a battling 49 as Australia restricted India to 132 for four in the opening game of the women's Twenty20 World Cup in Sydney on Friday.

The defending champions won the toss at a near-full Sydney Showgrounds and elected to bowl.

It looked a dubious decision as exciting 16-year-old opener Shafali Verma powered India to 40 without loss after four overs.

But the wheels then came off with three quick wickets falling as the momentum shifted.

Off-spinner Molly Strano, a late replacement for injured young pace spearhead Tayla Vlaeminck, bowled the tournament's first over and did well to give away just two runs.

But she was guilty of a howler in the next, dropping a straightforward catch from Smriti Mandhana who made the most of her life by smashing two fours.

Opening partner Verma also began peppering the boundaries, making it look easy as she plundered four fours off the world's top T20 bowler Megan Schutt in a single over.

But Jess Jonassen then pounced, bowling Mandhana lbw for 10 before Ellyse Perry tempted Verma into another big hit and she was caught at midwicket for 29.

Captain Harmanpreet Kaur, who admitted at the toss that she wanted to bowl first, lasted just five balls before being stumped by Alyssa Healy as a stunned India lost three wickets for six runs.

Jemimah Rodrigues and the experienced Sharma steadied the ship with a 53-run stand before Rodrigues was trapped lbw by Delissa Kimmince for 26.

Sharma fought on and finished one run short of her first T20 half-century, with Veda Krishnamurthy unbeaten at the other end on nine.

Jonassen was the pick of the bowlers with 2-24 off her four overs.

The World Cup, featuring 10 teams split into two groups, culminates in the final at Melbourne on March 8.