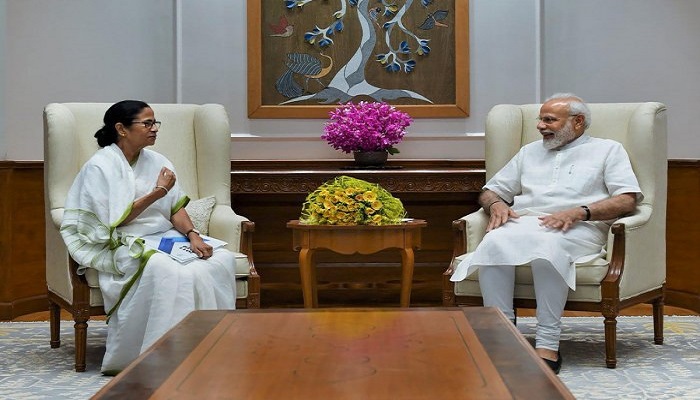 Expressing "deep concern" over the "steady reduction" of Central funds and inordinate delay in their release, West Bengal Chief Minister Mamata Banerjee on Thursday wrote to Prime Minister Narendra Modi seeking his intervention to ensure her state received its outstanding dues of Rs 50,000 crores from the Centre.

"I write to you with deep concern regarding steady reduction of central funds to the state and also inordinate delay in release of funds to us, from the Government of India," she said in the four-page letter.

"You will appreciate that this extraordinary situation is leading to great hardship and creating major difficulties in meeting our obligations for the welfare of the common people."

Banerjee complained that the release of GST compensation to the states by the Centre has become "quite irregular" and often gets delayed for months. "which is having a serious negative impact on the management of finances of the state'.

"This constitutionally mandated compensation may kindly be given as soon as it is due, otherwise the statee treasury cannot run smoothly," she said.

Banerjee said her state was being denied devolution of funds amounting to Rs 11,212 crores from the Centre during fiscal 2019-20 from the Union Budget estimate for 2019-20.

"Furthermore , the devolution of central taxes is being reduced from 2017-18 in comparison to the provisions made in the Union Budget," she said.

Banerjee said this has resulted in a acash crunch at the beginning of the month when funds are most needed for payment for developmental activities and other commitments.

"Therefore the date of devolution of the funds may please be shifted back to the first day of the month," she said.

The Chief Minister also drew Modi's attention to dues of Rs 36,000 crores which her state was yet to receive till date for the various Central-sponsored schemes, and another amount of Rs 2,330.01 crore pending from the Centre on account of Special Backwards Region Grant Fund.

She also complained that the Centre was relying more and more on cesses and surcharges as against taxes, over the past five years,

"It is a matter of concern that while cesses and surcharges constituted 6.17 per cent if the gross tax revenue in 2014-15, it has now increased to 18.4 per cent in 2019-20. Since these do not form a part of the kitty of Central taxes, their devolution to states does not happen. This has become an instrument of reducing the receivables of the state, from the Central government," she said.

Computing the state's dues for the various centrally sponsored schemes, Special Backwards Region Grant Fund, as also a pending GST compensation of Rs 2.406 crores, the Chief Minister said "the state is being deprived of the huge outstanding dues of Rs 50,000 crores".

"I appeal to you to kindly look into the matters and intervene, so that we can help our people towards the cause of development and well being," she added.