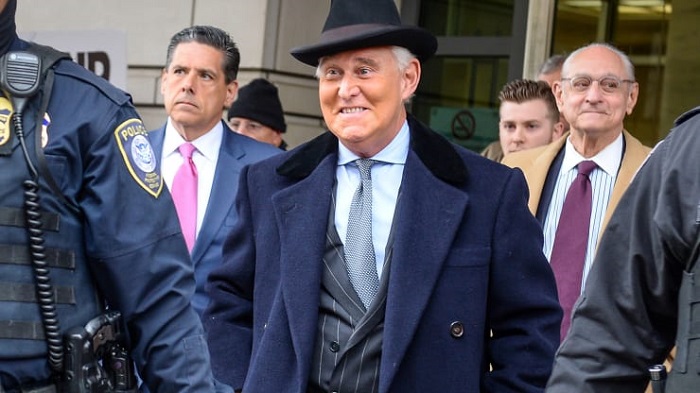 A federal judge sentenced President Donald Trump’s friend, longtime Republican operative Roger Stone, on Thursday to more than three years in prison for lying to Congress and tampering with a witness in an effort to protect Trump.

“The truth still exists, the truth still matters. Roger Stone’s insistence that it doesn’t ... are a threat to our most fundamental institutions,” Jackson said in a blistering denunciation of Stone, who lied about efforts to obtain damaging emails related to Hillary Clinton’s 2016 Democratic presidential campaign that were stolen by Russian agents.

The judge said that Stone’s crimes should arouse “dismay and disgust” that “transcend” political affiliation, before ordering him to serve 40 months in prison, pay a $20,000 fine, spend two years of supervised release and perform 250 hours of community service.

But Stone, 67, will not have to serve that sentence just yet — and possibly not ever.

The judge suspended imposition of all of the punishments pending her ruling on a request by Stone for a new trial on the grounds of alleged misconduct by a juror in his trial last fall.

If Jackson approves that request — which was spurred by revelations that the jury forewoman had posted messages critical of Trump on Twitter — the sentence that the judge announced Thursday will be void.

Stone, whose lawyers requested a sentence of probation, also could be granted a pardon by Trump. Stone’s supporters have called on the president to issue a pardon for him.

Trump, who has not ruled out issuing a pardon, has repeatedly criticized the case against his former advisor, and tweeted about it, yet again, during the sentencing hearing.

If Stone is pardoned, his conviction would be voided, and he would not face any criminal sentence.

Thursday’s hearing capped more than a week of controversy over Stone’s case, and accusations that Attorney General William Barr and Trump improperly interfered in the prosecution due to political considerations and because of Trump’s long relationship with Stone.

Barr forced the U.S. attorney for the District of Columbia, whose office handled the case, to recommend a more lenient prison term than the seven to nine years that trial prosecutors in the case originally proposed early last week

The four trial prosecutors quit the case in protest as the U.S. attorney filed a new sentencing memo a day after their own recommendation was filed.

That new memo called for “far less” time in prison, but did not specify exactly how long he should be incarcerated.

But John Crabb, the new prosecutor in the case, told Jackson on Thursday that Stone should receive “a substantial period of incarceration.”

The prison term sentence Jackson announced was markedly less than not only the original suggestion by prosecutors, but also less than the minimum term of nearly six years suggested by federal sentencing guidelines as calculated during Thursday’s hearing.

“I’m doing OK,” Stone told a reporter as he left the courtroom dressed in a black pinstripe suit, blue shirt and blue tie.

Some protesters heckled Stone with chants of “lock him up!” as he entered a car outside the E. Barrett Prettyman Courthouse and was driven away.

But supporters called out “pardon Roger Stone!” and “Roger Stone did nothing wrong!”

Stone did not respond when CNBC repeatedly asked him if he believes Trump will pardon him.

House Intelligence Committee Chairman Adam Schiff, D-Calif., said in a Twitter post that if Trump pardoned Stone it “would be a breathtaking act of corruption.”

Stone did not make a statement on his own behalf at the sentencing, a decision that could reflect his plans to appeal his conviction and a wish to avoid harming his defense at a second trial.

Jackson at the hearing dismissed arguments by Trump and other defenders of Stone that the the prosecution against him was politically motivated.

The judge also called Trump’s tweets about Stone “inappropriate,” but also said she would not hold them against Stone.

While Trump has called the case against his ally a “disgrace,” Jackson said, “There was nothing unfair, phony, or disgraceful about the investigation or the prosecution.”

She said that Stone, who reveled in cultivating a “dirty trickster” image, “characteristically injected himself” in the issue of a hack of Democratic emails by Russian agents by claiming he had access to Julian Assange, co-founder of the document disclosure group WikiLeaks.

WikiLeaks ended up releasing those emails during the 2016 presidential election.

Stone then lied to Congress a year later about his efforts to get access to those emails, the judge noted.

Jackson said that Stone lied because he knew that public disclosures that he was in touch with WikiLeaks would “reflect badly” on Trump.

Jackson early in the hearing ruled against most arguments by Stone’s attorneys related to the calculation of federal sentencing guidelines, which provide judges with a possible framework on which to base their punishment of a defendant.

Jackson said Stone should be penalized in that calculation for threatening violence against a witness in the case and that witness’s dog, and for obstructing a House committee’s work in investigating Russian interference in the 2016 U.S. presidential election.

Crabb, the prosecutor, apologized to Jackson for what he called “confusion” over the sentencing recommendation.

But Crabb also told the judge that he was not free to discuss who wrote the second sentencing memo that had recommended a much shorter term in prison for Stone. Crabb had signed that memo.

The prosecutor also did not object to Jackson including a set of “enhancements” to Stone’s sentencing guidelines which called for a prison term as long as 87 months.

“Mr. Stone has many admirable qualities,” said Ginsberg, who noted repeatedly that Stone was an elderly man with no prior criminal history.

Jackson said she did not doubt that portrayal, noting that she had read each of the many letters sent to her by Stone’s supporters.

But she added that judging Stone’s character is not her job.

“I am not passing judgment on Roger Stone as a man. That calls on a higher authority,” Jackson said.

Stone was convicted at trial in November of charges related to false statements he gave a House committee in 2017.

The statements were related to his contacts with Trump’s campaign during the 2016 presidential election, as Stone sought to get information about emails stolen by Russian agents from Clinton’s campaign manager and the Democratic National Committee.

Those emails, which were seen as embarrassing to Democratic nominee Clinton, were made public by WikiLeaks.

Stone also was convicted of witness tampering for threatening an associate, the comedian Randy Credico, in an effort to get him to corroborate his lies to Congress. Stone had falsely claimed that Credico was his conduit to WikiLeaks.