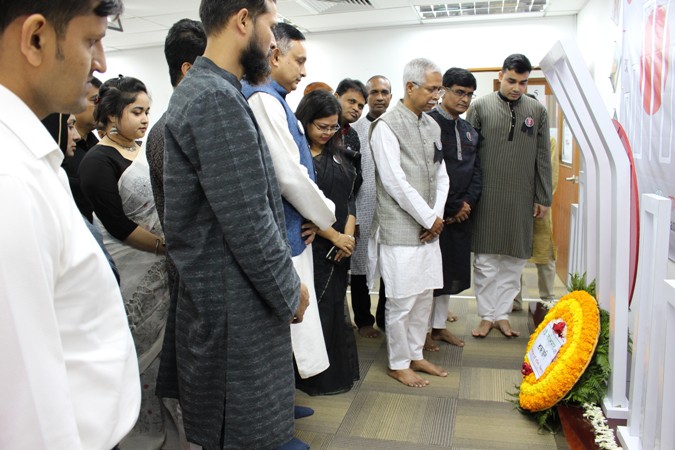 The Amar Ekushey and the International Mother Language Day was observed at Bangladesh missions abroad in a befitting manner, according to messages received in Dhaka.

In Singapore, the Bangladesh High Commission observed the Amar Ekushey and International Mother Language Day on Friday with due solemnity and in a befitting manner.

To mark the day, the HC in Singapore chalked out elaborated programme, says a press release.

Programmes of the day started with hoisting of the national flag at half-mast by High Commissioner Md Mustafizur Rahman.

A special prayer was offered for the salvation of the language martyrs as well as seeking divine blessings for the continued peace, progress and prosperity of Bangladesh. A one-minute silence was also observed as a respect to the martyrs.

A discussion meeting on the significance of the day was held at the hall room of the chancery. At the discussion, High Commissioner Mustafizur Rahman paid glowing tribute to the language martyrs and said that International Mother Language Day has now become a day of celebration of linguistic diversity around the world. He underscored the significance of the language movement in the evolution of our national history which in fact the first step towards achieving Bangladesh’s independence in 1971.

Representatives from social and cultural organizations, students of different educational institutions and a large number of the members of the Diaspora attended along with their families.

In Tokyo, the day was observed with due respect by the Embassy of Bangladesh in Japan. The day started with placing of the floral wreath in memory of the language martyrs at the Shaheed Minar situated at the Ikebukuro Nishiguchi Park in Toshima city in Tokyo.

The second part of the program was held at the embassy premises when the national flag hoisted at half-mast by Charge d’ Affaires. One minute of silence was observed and special prayer (Munajat) was offered for the salvation of the departed souls of Language Martyrs.

Besides, at the Bangabandhu auditorium of the embassy, the messages given by the Honorable President, Prime Minister, Foreign Minister and State Minister for Foreign Affairs on the occasion were read out to the audience.

Later Dr Sahida gave her welcome speech where she paid homage to the Father of the Nation Bangabandhu Sheikh Mujibur Rahman and to the Language Myrtars.

She explained the background of the Mother Language Movement of 1952 and urged all to participate and support at the events undertaken by the embassy to mark the ‘Mujib Year’.

Representatives of the Bangladeshi community living in Japan participated in the open discussion on the significance of the day. A video documentary on the language movement was screened at the program.

All the officials and staffs of the embassy were present at the program.

It brought out a ‘Probhat Ferry’ (dawn procession), led by High Commissioner Muhammad Imran and his wife Zakia Hasnat Imran. Officials and staff of the High Commission and their family members participated in it. The Ekushey elegy “Amar Bhaiyer Rakte Rangano Ekushey February” was sung as the parade went along the chancery premises, said a press release.

The newly-appointed high commissioner then led the mission in placing wreaths at the newly-installed Shaheed Minar (martyrs’ monument).

In a brief speech, Imran remembered the supreme sacrifices made by the language heroes of 1952. He paid homage to Father of the Nation Bangabandhu Sheikh Mujibur Rahman as well.

He said UNESCO declared Feb 21 as the International Mother Language Day in 1999 thanks to efforts made by Prime Minister Sheikh Hasina.

“As we observe this historical day, it’s important for us to make our young generation conversant with our rich and proud history, our heroes, the culture and heritage,” he said.

The mission published an Ekushey souvenir in tribute to the language heroes highlighting significance of the day and the special role played by Bangabandhu in the Language Movement.

A panel discussion was also held.

The national flag was hoisted at half-mast. A special prayer was held seeking divine blessings for the language martyrs. A minute’s silence was observed in memory of the martyrs.