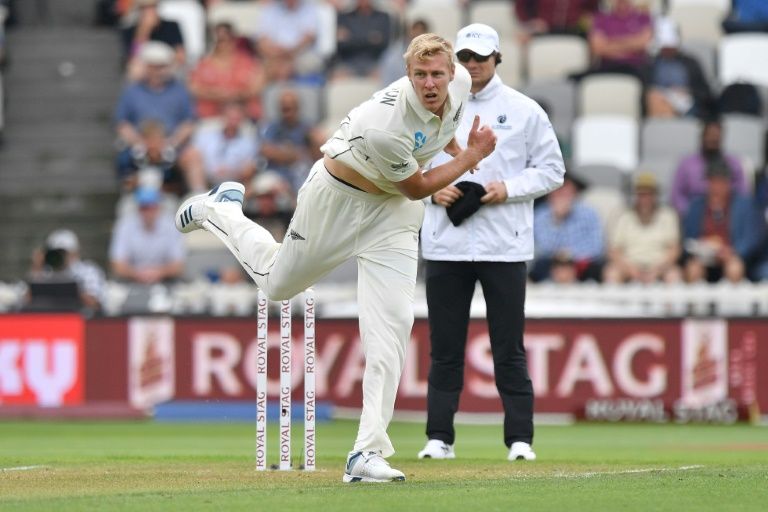 The towering Kyle Jamieson had a dream introduction to Test cricket with three wickets, including the prized scalp of Virat Kohli, in the opening two sessions of the first Test against India in Wellington on Friday.

It was unclear when play would resume, however, with rain starting during the interval and covers placed on the pitch.

Jamieson, who further repaid the selectors' faith with an excellent catch in the deep to remove opener Mayank Agarwal, was called into the New Zealand squad as cover during Neil Wagner's paternity leave.

While not as quick as Wagner, the 25-year-old has used his height to extract extra bounce that troubled the Indian top order.

In a nine-ball burst before lunch he had Cheteshwar Pujara caught behind for 11 and then outsmarted the world's number one batsman Kohli for two.

He kept the Indian skipper on the back foot for a few deliveries before pitching one up, wide of off stump, which drew Kohli forward and the ball was nicked to first slip where Ross Taylor clasped the catch in his fingertips.

Between lunch and tea, Jamieson added to his wicket tally with another fuller delivery that Hanuma Vihari (seven) edged to wicketkeeper BJ Watling, and he showed his safe hands to catch Agarwal after the Indian opener top-edged Trent Boult to long leg.

Agarwal was out for 34 after featuring in a 48-run stand with Ajinkya Rahane who was unbeaten on 38 at tea with Rishabh Pant on 10.

Rahane has a liking for the Basin Reserve ground after scoring the first of his 11 Test centuries there in the drawn Test against New Zealand in 2014.

New Zealand won the toss and elected to bowl first with a green wicket and overcast skies.

They were rewarded early on when Tim Southee removed Prithvi Shaw for 16 with an outswinger that collected the off stump as the opener attempted a drive without moving his feet.