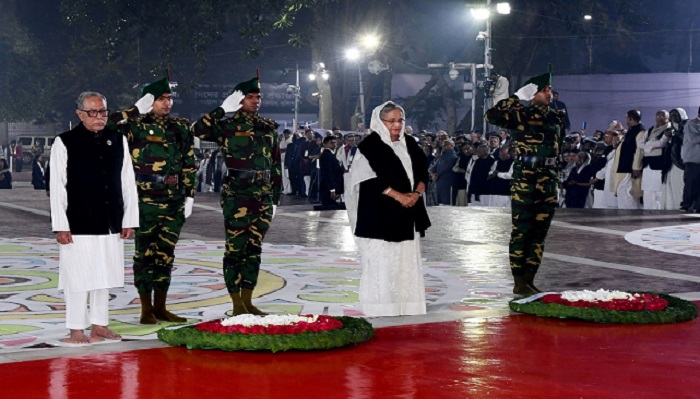 The world community joins Bangladesh on Friday in saluting the heroes of the 1952 Bangali language movement on the historic Amar Ekushey or the Language Martyrs Day, which is known now as the International Mother Language Day.

The language movement was a watershed in history as it fortified Bangalee nationalism and its spirit ultimately led to the country’s independence in 1971.

Sowing the very seeds of unique nationhood based on language and culture, valiant sons of the soil, including Salam, Barkat, Rafiq, Jabbar and Shafiur shed their blood in the historic Language Movement sixty-eight years ago to establish Bengali as a state language of Pakistan.

The day is being observed as the International Mother Language Day in 193 countries across the globe following United Nations Educational, Scientific and Cultural Organization recognition of Ekushey February on November 17 in 1999.

In a message, President Abdul Hamid called for strengthening bond of friendship among multilingual people for revival of world’s almost defunct languages to diversify the globe in respective societies.

“As the spirit of Amar Ekushey is now the incessant source of inspiration for the protection of own languages and culture of people around the world, let the bond of friendship among multilingual people be strengthened, world’s almost defunct languages be revived-it is my expectation on Shaheed Day and International Mother Language Day,” he said.

Extending warm congratulations and sincere felicitations to all multilingual people of the world along with Bangla-speaking people, the President said it is a unique celebration in protecting mother tongue as well as own culture and heritage.

“The aim of the language movement was to establish the right of our mother tongue as well as to protect self-entity, cultural distinction and heritage. Being a source of ceaseless inspiration, Amar Ekushey inspired and encouraged us to a great extent to achieve the right to self-determination and struggle for freedom and war of liberation,” he said.

“With the bloodshed passages of Language Movement in February, we achieved the recognition of Bangla as the mother tongue and consequently, we attained our long-cherished independence under the charismatic leadership of the greatest Bangalee of all time, Father of the Nation Bangabandhu Sheikh Mujibur Rahman in 1971,” he added.

In her message, Prime Minister Sheikh Hasina greeted the Bangla-speaking people and people of all languages and cultures across the world on the occasion of the glorious Martyrs and International Mother Language Day.

The great Ekushey is the symbol of grief, strength and glory in the life of every Bangalee as on this day in 1952, many valiant sons of the soil, including Salam, Barkat, Rafiq, Jabbar, Shafique and sacrificed their lives for protecting the dignity of the mother tongue, she said.

She also paid deep respect to the greatest Bangalee of all time, Father of the Nation Bangabandhu Sheikh Mujibur Rahman who had led the language movement and all other language veterans.

In 1948, State Language Movement Council was constituted comprising Tamuddin Majilish, Student League and other student bodies as per a proposal of Bangabandhu Sheikh Mujibur Rahman, she said, adding that the council called a general strike on March 11 to realise the demand for recognising Bangla as the state language.

Bangabandhu Sheikh Mujibur Rahman along with a number of student leaders was arrested on the day from in front of the Secretariat. They were released on March 15.

Bangabandhu chaired a public meeting at Amtola on the Dhaka University campus on March 16, she added.

The movement for the demand of mother tongue spread all over the country, she said, adding that on September 11, 1948, Bangabandhu Sheikh Mujibur was arrested from Faridpur and he was released on January 21, 1949. He was again detained on April 19 and released at the end of July and on October 14, Bangabandhu was again arrested from Dhaka and confined to jail, she said.

“His (Bangabandhu) undaunted inspiration from inside the jail provided new impetus to the people’s movement and in continuation of the movement, the language martyrs sacrificed their precious lives on February 21, 1952, while breaking Section 144 imposed by the rules,” she added.

The Prime Minister said the resonance of the pride of Amar Ekushey is now resounded in the hearts of the people of the world surpassing the boundary of Bangladesh.

She said the then Awami League government placed the demand to the United Nations and therefore, the UNESCO gave the recognition to the February 21 as the International Mother Language Day on November 17, 1999.

“The International Mother Language Day is now a source of inspiration to all people of the world in establishing the truth and justice,” she added

Elaborate programmes have been chalked out at all levels to observe the day to pay homage to the brilliant sons of the soil.

The programmes include hoisting the national flag at half-mast and black flag atop public and private buildings, wearing black badges and placing wreaths and offering prayers at the graves of martyrs.

In observance of the day, the ruling Awami League takes a two-day programme.

The party will organise a discussion at Bangabandhu International Conference Centre in the city at 3:00 pm on Saturday (February 22) with its President and Prime Minister Sheikh Hasina in the chair.

Like previous years, Dhaka University authorities will organise the programmes at the Central Shaheed Minar in coordination with other relevant agencies.

Security has been beefed up in and around the Central Shaheed Minar with the deployment of police and Rab personnel to ensure security at key points in the capital.

Dhaka Metropolitan Police Commissioner Shafiqul Islam told reporters that a four-tier security measure has been drawn around the venue.

Police said there would be several checkpoints and monitoring cells at the strategic points in the metropolis.

Huge contingents of police and Rab members are patrolling the area. Also, a bomb-defusing squad and a dog squad will remain deployed till tonight to ensure foolproof security.

Dhaka Metropolitan Police has imposed restrictions on the movement of vehicles on roads leading to the Central Shaheed Minar to pave the way for easy movement of the general public.

Back in 1952, the autocratic government imposed Urdu, the language of less than 20 percent people, as the only official language of Pakistan.

But students and people of East Pakistan rose in revolt against the then Pakistan government’s refusal to recognise Bangla, the language of 56 percent people of Pakistan, as one of the state languages.

In the face of strong opposition in 1956, the government was compelled to make Bangla, alongside Urdu, the state language of Pakistan.

Finally, the Bangalees were all smiles as the indefatigable sons of the soil championed the noble cause and brought smile to them.