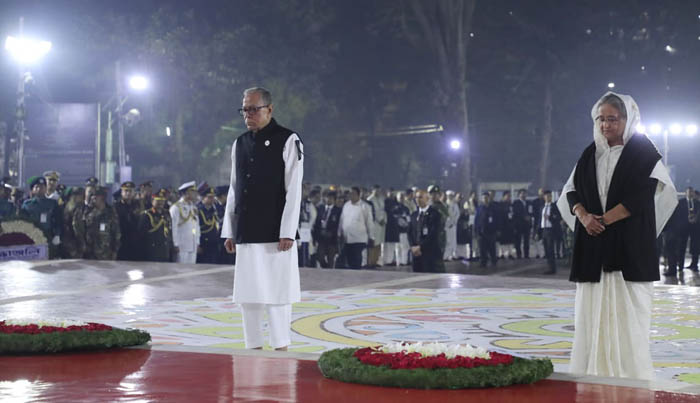 The nation starts paying homage to the martyrs of the Language Movement in 1952 from Thursday midnight, observing the Shaheed Dibosh and also the International Mother Language Day.

President Abdul Hamid, as the head of state, was the first to place a wreath at the altar of Central Shaheed Minar on behalf of the nation a minute after Thursday midnight followed by Prime Minister Sheikh Hasina, as head of the government.

The President and the PM stood in solemn silence for a while as a mark of respect to the Language Movement martyrs.

Later, Sheikh Hasina along with senior Awami League leaders placed another wreath at the monument on behalf of the party.

The leader of the opposition in parliament, Raushan Ershad, among others, also paid tribute to the language martyrs.

Almost all political parties, student organisations and socio-cultural and professional groups will pay their tributes to the language movement heroes during the early hours of this historic day.

Walking barefoot to the Central Shaheed Minar with wreaths and flowers and singing 'Amar bhaiyer rokte rangano Ekushey February', people from all walks of life will pay their deep respects to the heroes of the Language Movement, who sacrificed their lives for the recognition of Bangla as one of the state languages of erstwhile Pakistan.

Different political parties, their front organisations as well as socio-cultural organisations have taken up various programmes to pay their homage to the language martyrs all day long.

Meanwhile, law enforcement agencies have taken all-out security measures in and round the Central Shaheed Minar to ensure smooth observance of Amar Ekushey.