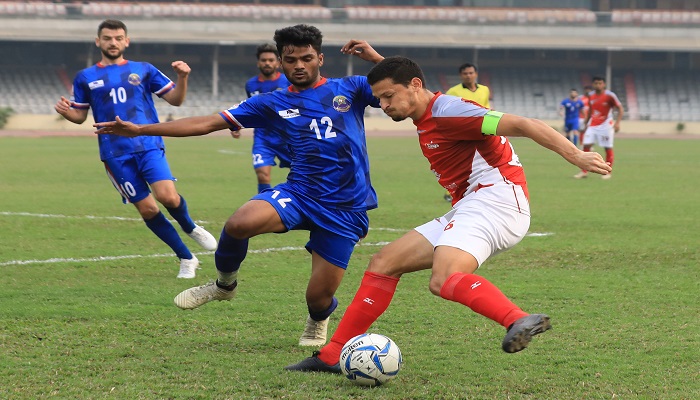 But Kings’ celebration evaporated in the 73rd minute as defender Faisal unintentionally buried the ball into his own net after a grounder shot from Police’s substitute Forward MS Bablu, who came in place of  Forward Md Shadin, got deflected hitting the post (1-1).

BPL champions got off to a winning start in the league as they beat Bangladesh Championship League (BCL) Runners-up Uttar Baridhara Sporting Club by 1-0 goal in the opening match of league at Sheikh Kamal Stadium in Nilphamari on February 13 while Bangladesh Police FC, which got promoted to BPL as BCL champions, conceded 0-2 goals defeat to BPL Runners-up Dhaka Abahani Limited in their first match at BNS on February 16.

With the day’s feat, Kings secured four points with one win and one draw while Police FC opened account earning one point with one draw and one defeat.

Ahead of their match, Kings made one change in the playing eleven. Finland-born Bangladeshi Defender Kazi Tariq Raihan for the first time appeared in the league. The 19-year old replaced national colored Defender Yeasin Khan who got suspended due to conceding a red card in the first match.

Both Kings and Police got several close chances during the first half. Kings got the first chance in the 4th minute while they were rewarded by a corner, but Police Goalkeeper Saiful Islam Khan smartly fisted the shot from Colindres.

Just two minutes later, Police got their first chance to open account from a free-kick, but Kings’ veteran Defender Bishwanath Ghosh cleared the ball from danger zone in the 7th minute. Police continued their attacks – a direct long-range free-kick from Bulgarian Midfielder Laskov Antonio was smartly fisted away by goalkeeper Anisur Rahman Zico in the 16th minute and forward Rivera Sidney Adam shot target off in the 18th minute.

After taking 1-0 lead in the 55th minute, Kings continued to play pressing football and got two close chances to extend their margin, but Police Goalkeeper Saiful Islam denied those efforts.

Kings will play their third match against Brothers Union Limited on February 25 at 6:30 pm at the same venue.

After the day’s match, Kazi Tariq Raihan said, “We have chances to score, but it was not our day. I am not blaming the pitch. We needed to do well in the final third.”