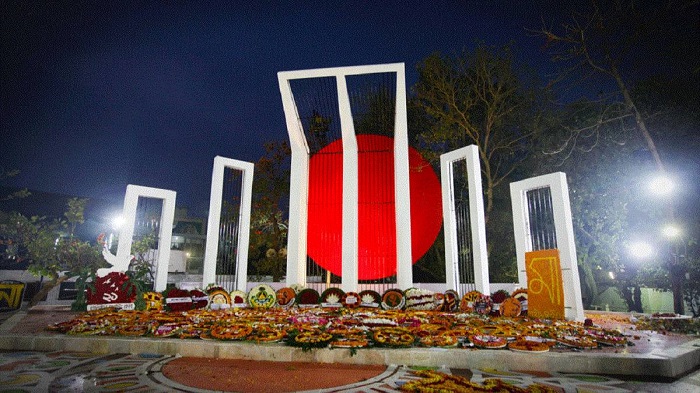 The nation is set to observe 'Amar Ekushey', the Language Martyrs Day (Shaheed Day) and the International Mother Language Day on Friday, marking the supreme of sacrifice of the language heroes for upholding the right to speak mother tongue Bangla .

The day will also be observed around the world as the UNESCO recognised the Ekushey February as the International Mother Language Day on November 17, 1999.

The theme of International Mother Language Day 2020 is "Languages without borders". The theme focuses on cross-border languages and helps to preserve indigenous heritage.

Walking barefoot to Dhaka’s Central Shaheed Minar with wreaths and flowers singing 'Amar bhaiyer rokte rangano Ekushey February', people from all walks of life will pay their respect to the heroes of the language movement who sacrificed their lives for achieving the recognition of Bangla as the state language of erstwhile Pakistan.

On February 21, 1952, students and the common people in Dhaka took to the streets in protest against the then Pakistani government's denial of Bangla as the national language and imposition of Urdu as the only official language of Pakistan.

Salam, Barkat, Rafiq, Jabbar and a few other brave sons of the soil were killed in police firings on this day in 1952 when students came out in a procession from the Dhaka University campus breaching section 144 to press home their demand for the recognition of Bangla as a state language of then Pakistan.

In his message, the President said, “The spirit of Amar Ekushey in now the incessant source of inspiration for the protection of own languages and culture of people around the world, Imbued with the spirit of Amar Ekushey, let the bond of friendship among multilingual people be strengthened, world’s almost defunct languages be revived and the globe be diversified in respective societies- it is my expectation on Shaheed Day and International Mother Language Day.”

Prime Minister Sheikh Hasina in her message said, “Holding the spirit of Ekushey and War of Liberation, our government achieved huge progress in every sector including macro economy, agriculture, education, health, communication, information technology, infrastructure, power, rural economic development, diplomatic success and cooperation during the last 11 years. Bangladesh is now a ‘Role Model’ for development in the world.”

“Through the implementation of Vision 2021 and 2041, and Delta Plan-2100, we have been working to build a hunger-poverty-free and happy-prosperous Golden Bangladesh as dreamt by the Father of the Nation. Let us be firmly committed in the spirit of the great Ekushey, we will unitedly build the Golden Bangladesh of the Father of the Nation,” she said.

The government has taken extensive programmes to observe the day in a befitting manner.

Four-tier security will be enforced around the main altar of the Shaheed Minar, its adjoining areas and the Azimpur graveyard of the language martyrs.

Different political-social-cultural-professional organisations will arrange various programmes, including seminars and cultural functions, to observe the day.

The programmes include placing of wreaths at the central Shaheed Minar, hoisting at half-mast the national and party flags at its offices across the country and Bangabandhu Bhaban and hoisting black flags in the morning, wearing black badges and placing wreaths on the graves of martyrs at Azimpur graveyard with Provat Feri as a mark of respect to the Language Movement martyrs.

BNP also has chalked out a 2-day programme to observe Amar Ekushey.