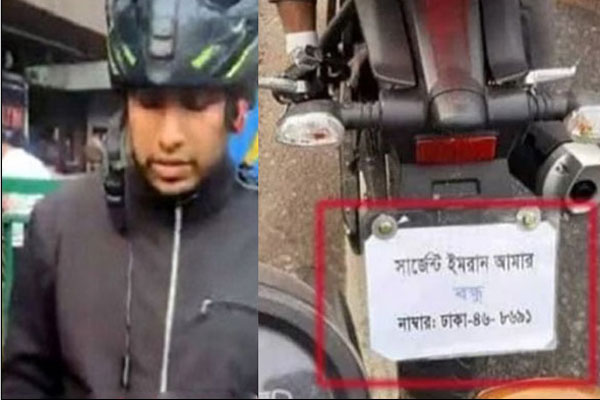 Law enforcers detained a motorcyclist in the capital’s Karwan Bazar area on Wednesday and fined him Tk 1000 for using controversial identity on his vehicle’s number plate, inscribed with writings -- ‘Traffic sergeant Imran is my friend’.

Earlier, a photo of the controversial number plate went viral on social media platform Facebook and sparked huge criticism among the netizens of the country.

The viral photo drew the attention of the high official of the Dhaka Metropolitan Police and the traffic department of the DMP undertook a special drive to nab the biker.

Asked about the cause of using ‘Traffic sergeant Imran is my friend’ on the number plate, detained Abir said he is a service holder in a private firm.

“Imran is one of my best friends. He did everything from buying the bike to training me to ride it. Therefore, I have written his name (Sergeant Imran) on the number plate as a token of gratitude to him,” Abir claimed.

Sergeant Jewel told media, “To write names or inscribe anything on vehicle’s number plate is strictly forbidden according to Road Transport Act 2018. If any carrier violates the act, there is a provision for a Tk 1000 fine for him or her.”

He also said, “As all his papers of the motorcycle, including registration, license and insurance, were okay and he confessed his mistake and felt sorry for it, he was fined Tk 1000. No case was filed against him in this regard.”