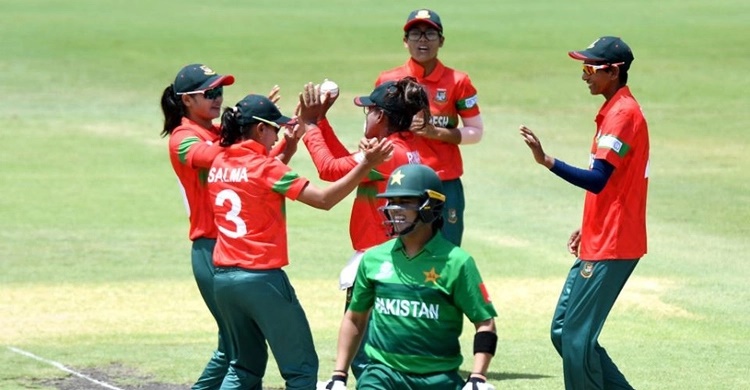 Bangladesh geared up well for the ICC Women’s Twenty20 World Cup, beating Pakistan by five runs in their final warm-up match in Brisbane, Australia on Thursday.

Bangladesh put up a mediocre 111-8 after opting to bat first at the Allan Border Field but thanks to Jahanara they defended it well, bowling Pakistan out for 106 in 19.4 overs.

For Bangladesh, Murshida Khatun scored highest 43 runs off 38 balls with the help of six boundaries.

Fargana Haque (21), Ritu Moni (14 not out) and Nigar Sultana (13) were the other significant run-getters.

Aiman Anwar was the most successful bowler for Pakistan with 2-12. Jahanara and Bangladesh spinners then reduced Pakistan to 23-3 inside four overs to give them initial shock before denying the mighty opponents the victory eventually.

Khadija Tul Kubra played a key hand with the ball alongside Jahanara, picking 3-11 in her four overs as Bangladesh got the much-needed boost ahead of the tournament-proper.

Pakistan opener Javeria Khan however remained firm amid the downfall of wickets around her. She for a while threatened to take the game away from Bangladesh’s grip but Kubra got the better of her in the 16th over of the innings after she played 41 off 34.

Bangladesh’s first warm-up match against Thailand was rained off without a ball being bowled.

Bangladesh have been drawn in Group A alongside hosts Australia, India, New Zealand and Sri Lanka.

The World Cup kicks off on Friday in Sydney but the Tigress would begin their campaign against India two days later in Perth on February 24.

Bangladesh failed to win a single match in their previous Twenty20 World Cup campaign in West Indies but took a long preparation this time, which included a conditioning camp in Australia’s tourism hub Gold Coast.

The Tigress reached Gold Coast on February 3 and played two practice matches against a local club where they won one game while the other match was washed out due to rain.