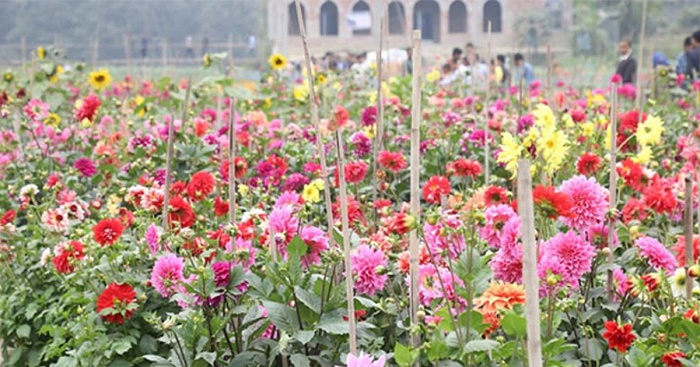 Flower growers in different villages under Kalagachiya union in Bandar upazila of Narayanganj are expecting to sell flowers worth Tk 20 crore this season amid bountiful production.

Sabdi village, known as the ‘Kingdom of Flower’, not only attracts traders but also tourists looking for a break from the monotony of city life.

During a recent visit to villages including Sabdi, Dighaldi and Madhabpasha along the bank of the Brahmaputra River under Kalagachiya union, the UNB correspondent saw flower growers passing busy time in the fields.

Flowers were cultivated on about 400 bighas in 10 villages under the union. About 40 varieties of flowers, including marigold, cherry, chrysanthemum (chandramallika), rosemallow (joba), sunflower, dahlia, kath maloti, belli and jarbara are being grown here.

The flowers are being supplied to various parts of the country, including Dhaka.

Adhir Chandra Haldar, a flower grower from Digholdi village, said the production has been very good this year.

Sudhir Chandra, another florist from the village, said they could not cultivate flowers on a large scale despite high demand because of financial problem.

Mohamamd Abdul Kadir, additional deputy director of Department of Agricultural Extension (DAE), said many steps have been taken to expand flower cultivation in the district.

“We’re in touch with the flower growers. We’ve talked to them and asked about their problems,” he said, assuring to provide necessary support, including loans from the upazila parishad and zila parishad loan committee.

This year, about 50 hectares of land in Sabdi village have been brought under flower cultivation.

“Traders from Narayanganj, Dhaka and Narsingdi are coming here to purchase flowers,” he said.