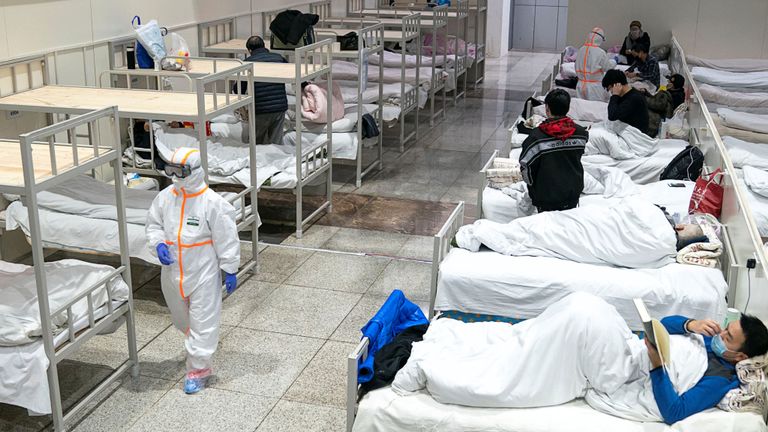 Weeks into the novel coronavirus crisis, the outbreak finally appears to be stabilizing in central China, where the virus was initially detected before it spread throughout the country and the world.

Small outbreaks continue to fast expand elsewhere, however, not least of which on board the Diamond Princess cruise liner in Japan, where two deaths were confirmed Thursday, the first from the hundreds of cases on the ship, which has begun disembarking passengers after a 14-day quarantine this week.

The global death toll now stands at 2,120, after an additional 108 deaths were reported in Hubei province as of Thursday morning. All but eight deaths have occurred outside of mainland China.

An additional 349 cases were confirmed in Hubei, more than 1,300 fewer than reported the day before. Outside of the provincial capital Wuhan, epicenter of the outbreak, the daily count of patients who have been treated and discharged has exceeded the number of newly confirmed cases for four consecutive days now, according to state news agency Xinhua.

There is some uncertainty of how cases are being diagnosed in Hubei, with the criteria for diagnosing the virus outside of the lab shifting in recent weeks. Chinese authorities this week switched back to reporting only laboratory confirmed cases from Hubei, after last week allowing clinical diagnoses by doctors -- based on symptoms or more immediate tests -- to be counted towards the province's totals.

More than 10,330 patients have been discharged across Hubei so far, though some 43,000 remain in hospital, 2,050 of whom are in a critical condition, the provincial health authority said.

The Chinese Center for Disease Control (CCDC) previously estimated that the virus peaked in late January, according to data from lab tests. However, the number of clinically diagnosed cases -- patients with symptoms who could not be tested or were believed to have falsely tested negative -- continued to rise well into February.

While the data from the epicenter of the outbreak appears to be positive, the crisis may not be over yet, either inside China or worldwide. Experts have warned there could be a renewed increase in cases once China properly returns to work late this week or next -- hundreds of millions of people around the country have been on lockdown for weeks now.

The number of cases is also continuing to grow alarmingly in several places outside of the mainland, though still far short of the figures seen in China. On Thursday, South Korea recorded an additional 31 confirmed cases, bringing the country's total to 82. That came after an increase of 20 on Wednesday, previously the largest single-day jump in Korea.

In Japan, where global attention has been focused on the Diamond Princess cruise liner, the worst outbreak outside of China, there have been 68 cases confirmed with no connection to the ship, raising concerns of a self-sustaining outbreak in the country.