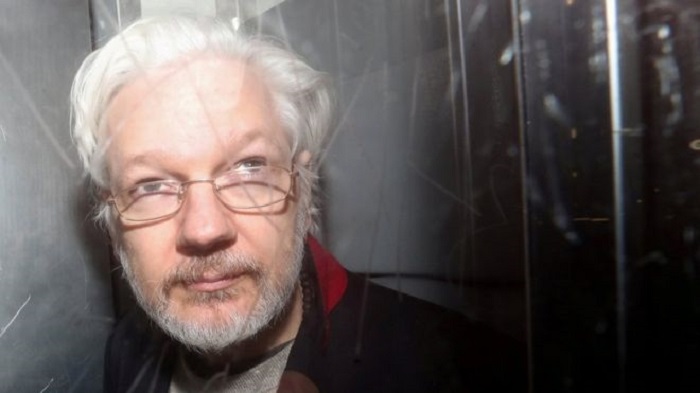 A witness in Julian Assange's extradition hearing will claim President Donald Trump offered the Wikileaks founder a pardon if he said Russia was not involved in leaking emails during the US election.

Assange's barrister revealed the claim at Westminster Magistrates' Court ahead of an extradition hearing next week.

The White House said the claim is "a complete fabrication and a total lie".

Assange is facing extradition to the US on 18 charges over leaked diplomatic cables.

He faces up to 175 years in prison if found guilty.

His barrister, Edward Fitzgerald QC, told the court there was evidence alleging that former US Republican Congressman Dana Rohrabacher made the pardon offer.

Rohrabacher visited the Ecuadorian embassy in August 2017, where Assange was staying, he said.

Fitzgerald said a statement from Assange's lawyer Jennifer Robinson shows "Rohrabacher going to see Assange and saying, on instructions from the president, he was offering a pardon or some other way out, if Assange... said Russia had nothing to do with the DNC leaks."

Responding to the claims, White House press secretary Stephanie Grisham said: "The President barely knows Dana Rohrabacher other than he's an ex-congressman. He's never spoken to him on this subject or almost any subject.

"It is is a complete fabrication and a total lie."

A series of embarrassing emails leaked from the Democratic National Congress (DNC) and the Hillary Clinton presidential campaign were hacked before being published by WikiLeaks in 2016.

The US Department of Justice later charged 12 Russian intelligence officers with the hack.

The 18 charges faced by Assange include conspiring to commit computer intrusion, and relate to the publication of hundreds of thousands of classified documents leaked by former US army intelligence analyst Chelsea Manning a decade ago.

His extradition hearing is due to begin at Woolwich Crown Court on Monday, beginning with a week of legal argument.

It is then due to be adjourned before resuming on May 18 with three weeks of evidence.

Assange has been held on remand in Belmarsh prison since last September, after serving a 50-week jail sentence for breaching bail conditions.

He went into the Ecuadorian embassy in 2012 to avoid extradition to Sweden on allegations of sexual offences, which he always denied and which were later dropped.