UN chief concerned about discrimination against Muslims in India 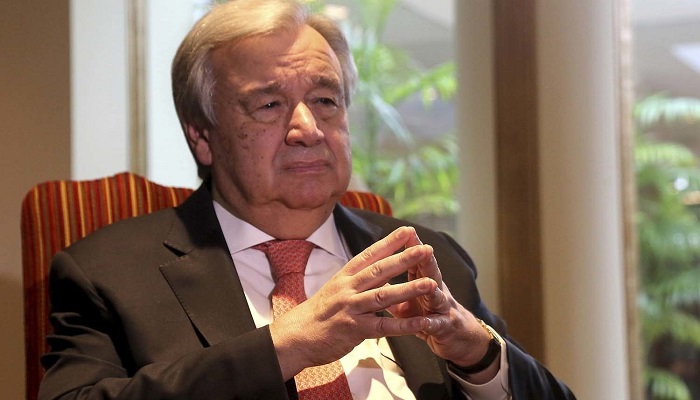 United Nations Secretary General Antonio Guterres has said he is concerned that “there is a risk of statelessness” for the two million people, mostly of Muslim origin excluded by the divisive Citizenship Amendment Act passed by the Indian parliament.

When asked if he was personally concerned about the rising discrimination against minorities in India, Mr Guterres exclaimed, “Of course!” as it is pertinent that whenever nationality laws are changed, efforts are taken to avoid statelessness and to ensure that every citizen of the world is also a citizen of a country.

In an exclusive interview to Dawn News, the UN chief was asked about reports in the international media, including Amnesty International, Human Rights Watch and recent fact-finding reports on Kashmir released in New Delhi, regarding torture, sexual abuse and incarceration of children as young as seven by the Indian military.

He said all these reports, including two by the UN High Commissioner, played an important role in “clarifying exactly what is happening” in Kashmir and “it is essential that these reports are taken seriously”.

When asked by this scribe why the UN has failed to constitute a high-powered inquiry commission to go to the Indian occupied valley and investigate the atrocities committed there, the secretary general said: “Only the governing bodies of the UN or the Security Council can make that decision, but these reports are credible, relevant and very important.”

He was eager to acknowledge that the current structure of the UN and veto power to only its five permanent member states were hampering the ability of the UN to deliver the very objective it was created for — conflict resolution. The rules-based system that came post-World War II was a result of a cohesion amongst western countries which is rapidly dissipating yet the top bureaucrat thought the UN was not threatened as much as it was challenged by this new reality.

In order to ensure increased efficacy of the UN, he felt the body had to be reformed to be made “more democratic, more open and more effective” and to be more representative of the multilateral world we live in today.

“We lived in a bipolar world, the rules were relatively clear. Today it is no longer bipolar, not yet multipolar, it is a kind of a chaotic world. Power relations are unclear so we see situations of conflict to which many spoilers can do whatever they want because there is no way to create a minimum of order,” he added.

The world moderator felt that we live in a moment of paradoxes; “on one hand, we need global responses to global problems, we need multilateral governance more than ever, yet we live in a chaotic world in which it is difficult to make things move forward. It is a challenge to which we must respond by reforming the UN”.

Responding to the alleged ineffectuality of the UN by saying that he “does not rule the world” and that it was vital that countries “respect UN Security Council resolutions”, Mr Guterres implored that “all I have is my words. People all over the world are unhappy with the way political establishments are working and with the way that globalisation has left so many people behind”.

When asked about the position of the United Nations regarding the Palestinian question, the UN secretary general responded that “our position has not changed”, asserting that he remained committed to the two-state solution, with “two states living side by side”. He said he believed that these states should have “borders based on the borders of 1967” and that “west Jerusalem should be the capital of Israel and that east Jerusalem should be the capital of Palestine”, reaffirming that “this is our line and our line has not changed”.

Mr Guterres also affirmed that the UN stood ready to facilitate a dialogue between Israel and Palestine “based on international law and principles”. When asked about the UN contingency plans with regard to a greater refugee influx in Pakistan and delay in Afghan refugees’ repatriation if the Afghan peace process falls through, and the withdrawal of US troops leaves a dangerous power vacuum leading to resurgence in the Afghan civil conflict, the world moderator said that “we don’t have a contingency plan”. He stressed that “there is an opportunity for peace” and that “Pakistan is playing a very important and positive role”. He proclaimed that “we must do everything for peace in Afghanistan to be established”, and called for a massive investment in Afghanistan to support and rebuild the beleaguered and war-torn country. Whether we would be able to see UN lead solutions to ongoing international conflicts in our lifetime, the secretary general was neither optimistic nor pessimistic, rather determined to do all in that is in his power to get the UN resolutions implemented.