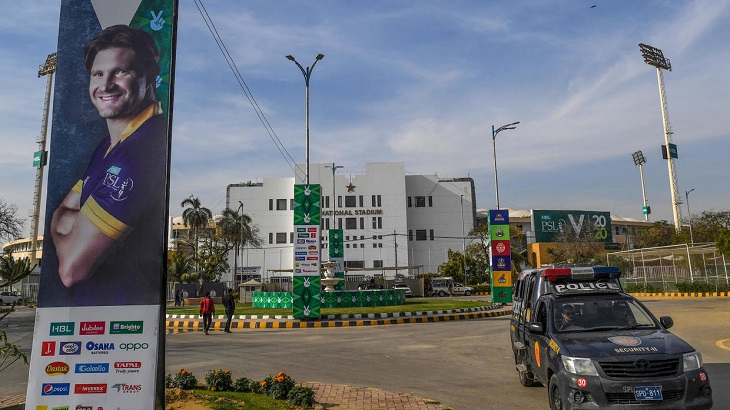 Cricket-crazy fans in Pakistan will be able to enjoy the whole of their Twenty20 league on home soil for the first time when the star-studded fifth edition begins Thursday in Karachi.

Matches will be shared between Karachi, Rawalpindi, Multan and Lahore after security concerns had caused most games in previous years to be played in the United Arab Emirates, with only the final stages of the last three editions being held at home.

Pakistan Cricket Board (PCB) chairman Ehsan Mani believes the willingness of overseas stars to sign up illustrates how security has improved in a country where the army has fought a militant insurgency for years.

"So many players touring Pakistan shows the confidence they have in playing in Pakistan," said Mani, who took over last year with the aim of bringing cricket home.

"For the fans, this will be a long-awaited opportunity to see their cricketing heroes live in action and reinforce their love for this great game after being left deprived."

A generation of Pakistan's youth had not watched top-flight cricket at home since a deadly attack on the Sri Lankan Test team's bus in 2009 prompted international sides to shun the country.

Security improved enough by 2015 for limited-overs internationals to be hosted but Test cricket returned only in December after a decade's exile.

"It's important that it goes off well, for the future of Pakistan cricket," said former Australian batsman Dean Jones, who is the coach of Karachi Kings.

"All the big boys, who are here from overseas, must bring their countries here and play."

Since hosting Zimbabwe in 2015, Pakistan has provided teams with security normally reserved for visiting heads of state, with hundreds of police guarding stadiums and hotels and the PSL is no different.

Roads to stadiums will be blocked and fans will have to go through multiple security cordons.

Pakistan hosted only the tournament final in 2017, expanding to four matches in 2018 and eight a year ago.

"I welcome all the foreign players and hope they take a good message .. so that in the coming years we have more international teams coming."

Australia's limited overs leg-spinner Fawad Ahmed was born in Pakistan but fled to his adopted country in 2010 after Taliban threats.

"Hopefully it goes safe and sound to bring joys for the whole nation, and youngsters get inspired," said Ahmed, who will play for the Quetta Gladiators

Six teams -- Islamabad United, Karachi Kings, Lahore Qalanders Lutan Sultans, Peshawar Zalmi and Quetta Gladiators -- will play each other twice in a round-robin phase with the top four contesting play-offs beginning on March 17. The final will take place in Lahore on March 22.