Home delivery of govt service in Bagerhat; a big surprise for people 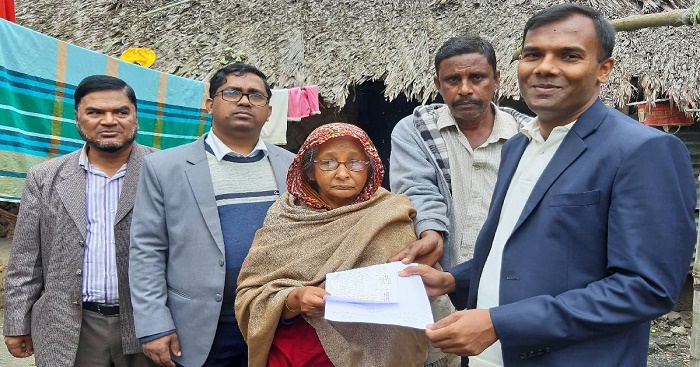 In a rare move, the district administration of Bagerhat has started paying compensation to the affected people of land acquisition for Khan Jahan Ali Airport making door-to-door visits.

A team of the district administration, led by Additional Deputy Commissioner Md Quamrul Islam, went to the house of elderly woman Rokeya Begum, 85, at Hogoldanga village in Rampal upazila on February 8 and handed over a cheque for Tk 4 lakh to her.

Not only Rokeya but also 31 other land owners, including Rumisa Khatun, Arafatun Nesa, Mannan Malongi, Zabed Malongi, Motiar Rahman and Ahmed Malongi received their compensation in the same manner on the day. They were given Tk 74.44 lakh in total.

Before the start of the cheque delivery, a mass hearing was held at a local school ground where the ADC heard from the land owners and decided to hand over cheques at doorsteps.

Expressing their satisfaction, the land owners hailed the move of the DC office.

After receiving the cheque, Rokeya Begum said, “I never imagined even in my dream that I’d receive compensation sitting at home.”

Arafatun Nesa, who received a cheque for Tk 5.08 lakh, said, “I believed only after getting the cheque in my hand that it’s possible to receive any compensation from home. There was no hassle.”

Zabed Malongi said the DC office team came to his home and handed over a cheque for Tk 39,000 after taking his signature.

Welcoming the move, the victims said they used to face harassment and hassle as they had to run from one department to another to receive the money of any compensation.

But this time, they received cheques sitting at their own houses, an unimaginable home delivery of government service.

Deputy Commissioner Md Mamunur Rashid said they want to implement the ‘zero tolerance’ policy against corruption at the grassroots level so that people get happy with various services. “As part of it, we’ve introduced the cheque handover at doorsteps,” he said.

In the future, the land owners would be able to apply online for receiving compensation, he said. “The process will begin soon. Following mass bearings, the victims’ compensations will be transferred to their bank accounts.”

ADC Quamrul Islam said they are handing over cheques of compensation for the land acquisition making door-to-door visits which brought to end the nuisance of brokers. “This will also boost people’s confidence in the government.”

Md Delwar Hossain, Bagerhat district land acquisition officer, said they went to land owners’ houses to hand over cheques so that they do not face any hassle and harassment.

The proposed airport will be built in Rampal upazila near Khulna-Mongla highway.

The land acquisition for the project has been completed and construction of boundary wall is going on. Civil Aviation Authority of Bangladesh (Caab) is implementing the project.

According to Land Acquisition Department, a total 97.65 acres of land were acquired in 1994-95 fiscal year in the first phase.

The government allotted Tk 165 crore as compensation for the land owners. Some 1,250 land owners have already received Tk 109 crore.