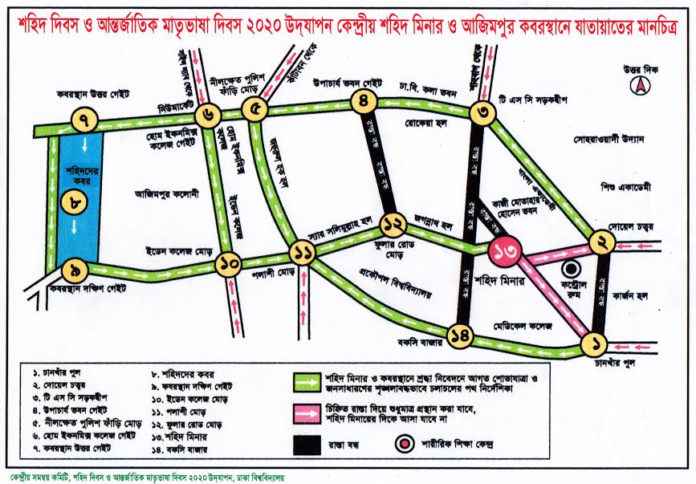 Dhaka University’s ‘Central Coordination Committee for Observing Amar Ekushey’ has drawn up a route map for the people who will come to Central Shaheed Minar and Azimpur Graveyard on February 21 to pay tribute to the martyrs of language movement.

The route map will come into effect from 8pm on February 20 (Thursday), said a press release.

According to the route, people will be able to enter Azimpur graveyard through the old High Court road, Doyel Crossing, Bangla Academy, TSC crossing, road beside Vice-Chancellor’s residence, New Market crossing and the north gate of the graveyard.

Those who want to go to Shaheed Minar without visiting the graveyard will use the road on the left of Nilkhet Police Outpost (west of Sergeant Zahurul Huq Hall) after crossing the Vice- Chancellor’s residence.

The Shaheed Minar could also be reached through the road of Home Economics College and Eden College via Azimpur and Palashi crossings.

From Chankharpul area, people can go to Shaheed Minar through Bakshibazar crossing, Palashi crossing and the road in front of Sir Salimullah Muslim Hall and Jagannath Hall.

It is to be noted that the road on the east of Jagannath Hall from TSC will remain completely closed. The road from Vice Chancellor’s residence to Fuller Road crossing and the road from Chankharpul to Curzon Hall will remain closed for public.

After placing wreaths at the Shaheed Minar, people can exit through the road in front of the university playground, Doyel Chattar and Chankharpul.