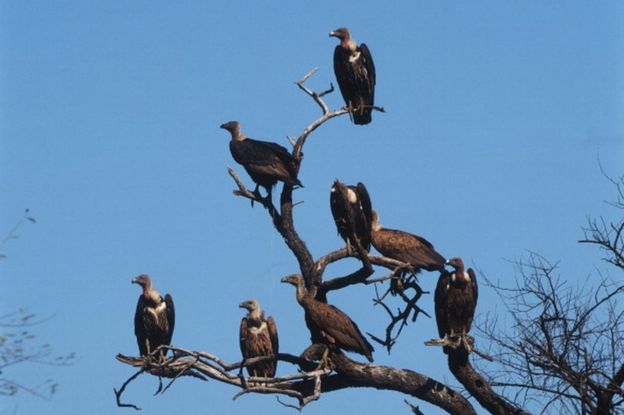 Much of India's bird population has sharply declined in the past few decades, according to a major study.

The State of India's Birds report relied on the observations of more than 15,000 birdwatchers who helped assess the status of 867 birds.

It found the greatest decline in the numbers of eagles, vultures, warblers and migrating shorebirds.

But the population of peafowl, the national bird, has increased significantly.

Hunting and habitat loss are the two main reasons behind the decline. "Collision" with electricity lines, according to the study, is a "prime current threat" to birds.

The report, the first comprehensive study of its kind, made two assessments: the drop in bird population over the last 25 years, and over the last five years.

"In the long-term trend assessment, there was appropriate data available only for 261 species, of which 52% had declined [in numbers]. For current trends, there was data only for 146 species, of which [numbers of] nearly 80% were declining," said MD Madhusudan, co-founder of Nature Conservation Foundation.

It's based on more than 10 million observations, drawn from sightings and meticulous notes made by professional birdwatchers.

The data was then collated on eBird, a global crowdsourced database that has real-time data on the distribution and abundance of birds.

Species that have suffered the highest declines

Species whose numbers have increased

The local sparrow population was found to be roughly stable across the country as a whole, although it has fallen in the major cities.

The population of migratory birds - both long distance and within the subcontinent - also showed a "steep decline".

The report says that since the 1990s, the numbers of several species of vultures, bustards and other specialist grassland birds have also drastically dropped.

Some species popular in the bird trade, such as the Green Munia, are at "dangerously low" numbers, the report says.

Meanwhile, the Jerdon's Courser, an endangered bird with "mysterious" breeding habits which was rediscovered in 1986 after a gap of 138 years, has not been seen since 2008.

But there's some good news as well: the Forest Owlet, another endangered bird that was rediscovered in 1997, is being reported from many more locations.

But the study cautions that its research is also a chronicle of "individual species", and not a report on the "overall health of India's birds, including those considered common and hence of little conservation concern".

It says that "abundance trends" are available only for "a handful of bird species" - and mostly for those that tend to be "larger, more obviously threatened and relatively charismatic".

"For the vast majority of Indian birds, lack of data has hindered a clear understanding of how they are faring. Such an understanding is vital for conservation science, management and policy."