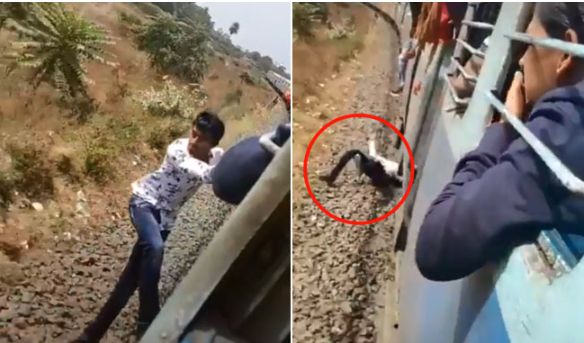 Indian Railway Minister Piyush Goyal has shared a horrifying TikTok video of a stunt gone wrong on a moving train, urging citizens to follow rules. The video, which appears to have been filmed by a passenger travelling on the train, shows a man hanging out of the doorway of the moving train.

Only a second into the video, he loses his footing and falls off the train, almost getting run over as people watching the stunt scream in horror.

The seven-seconds-long video ends with the man sitting up as the train speeds past him and a passenger on the it motions for him to stay still.

Sharing the video on Twitter this morning, Mr Goyal, 55, criticised the stunt as foolish. "Chalti train mein stunt dikhana bahaduri nahi, moorkhta ki nishani hai (Doing stunts on a moving train is not bravery, it's a mark of foolishness)" he wrote.

He also asked his followers to follow rules and not put their lives in danger.

The video has been viewed more than 8,000 times within an hour of being shared online. Many agreed with Mr Goyal in the comments section.

TikTok is a China-made mobile phone application that allows users to post short clips of themselves performing acts, stunts and lip-syncing songs and tunes. It has invited criticism in the past as well. In December last year, five TikTok video makers were arrested in Greater Noida for performing stunts on a motorcycle.