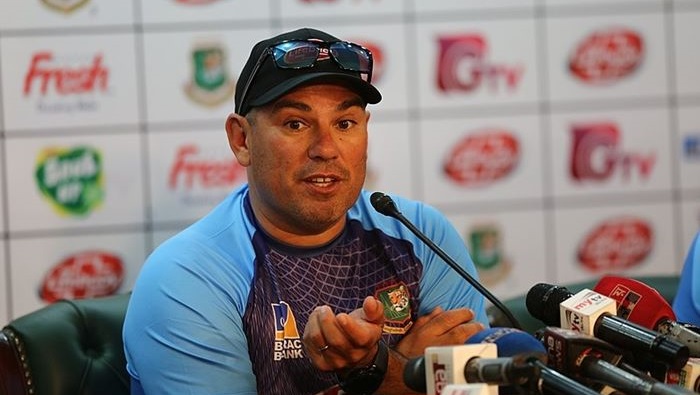 Things haven't been easy for Russell Domingo as Bangladesh head coach. A tough trip to India, a tour of Pakistan, and a string of losses have raised a lot of eyebrows. With three losses in as many World Championship matches, the focus is now on building a pace battery and backing the young players to produce results.

The Bangladesh head coach discussed his tenure, preparations, the Bangladesh pace unit and a lot more in an exclusive one-on-one with Cricbuzz. Excerpts:

Do you think your "honeymoon period" as head coach is over and people will start expecting results soon?

Yeah probably. I have been here for five months and now I have got a good understanding of which players are suited for Test match cricket and got an understanding of where players need to improve and what they need to do. So I am very excited going forward. Our preparation in the previous Test matches against India and Pakistan have been poor because of the scheduling. We didn't have time as a team. That's why leading into this Test match we have got four or five days as a squad so that we can work extensively on a few things that we need to improve.

In the previous Test matches, Bangladesh didn't play too many pace bowlers but against Zimbabwe, the management decided to pick five pace bowlers in the squad. What's the thinking behind that?

Look, we are not going to play four pace bowlers. That's not going to happen. But I think it's really important to get those four or five fast bowlers to work with us for four or five days. We have got a new bowling coach in Ottis (Gibson). So it's good for him to look at guys like Mustafizur, Hasan Mahmud, Rahi [Abu Jayed], Ebadot and the other bowlers that he hasn't seen before. We are not going to play four seamers in Dhaka but for preparation, we feel those are probably the best six fast bowlers available to us for Test cricket.

Before the Pakistan series, you said Mustafizur needs to do some technical work and now all of a sudden he is back in the squad. You always advocated consistency in selection policy. Do you feel this reflects consistency?

I always like to have consistency in selection policy and that's why he is back; so that we can work with him on some technical stuff. If he doesn't come back into the squad, then when is Ottis going to get to see him and work with him? So when I say he has got some technical work to do, this is where it begins. I can't see Mustafizur playing this Test match but this is a starting point for him.

How long will you back Abu Jayed and Ebadot Hossain?

It's very important to back players, and that doesn't just apply to the pace bowlers. I feel that we have got to be consistent with our selection policy. The same batsman playing in Pakistan minus Mahmudullah must play in the next Test series and we must give them opportunities to find ways to play Test match cricket and get big scores. Exactly the same goes with the bowlers. I had a look at Rubel in the first Test match (against Pakistan at Rawalpindi, where he picked up 3-113) and I have spoken with him. He is far better as a white-ball bowler than Test match bowler and that's why he's been left out.

What about Al-Amin Hossain?

I had a discussion with Al-Amin as well. I see him as a white-ball bowler as well rather than a Test bowler. He is not carrying any injury at the moment and he is fit to play but I see him very much in the one-day set-up. Guys like Jayed, Taskin, Ebadot and young Hasan Mahmud are the guys we feel have the potential to be in Test cricket. This is a group of five or six pace bowlers that we feel we can develop as Test bowlers.

Until Mustafizur improves on his shape, he will be very much a white-ball bowler. We need to have a discussion with him and we believe he needs to improve before he can be a Test match bowler. Like I said he needs to work on technical things before playing Test cricket but he is our number one limited-overs bowler.

Can you tell us how long you will back Liton Das, with Nurul Hasan also making a strong case for himself?

I think Liton is going to be a fantastic player for Bangladesh and I know Sohan [Nurul Hasan]; I have watched him in domestic cricket and probably watched him with an A tour and he is a good cricketer. However, Liton is only 25 and he is a young player with ability, who needs to be given extended runs.

But there can be someone like Mohammad Mithun who might not be as fluent as Liton but looks like he knows how to construct his innings...

That is why I wanted to give a player like Mithun an extended run in the Test team. He is a fantastic young player and I do not want him to play a Test match and get dropped in the next game. I want to give him an extended run because can be a fantastic player. People need to be patient with him, but having said that, the players need to perform and pay dividends at some point as well.

Skipper Mominul is considered to be the best Test batsman but he's in a bit of rut at the moment. Are you concerned?

Mominul probably has got the best Test record in Bangladesh. He has got eight Test hundreds but it will take him some time to balance out captaincy and scoring runs. He has a lot to learn at the moment, and with time, he will know how to deal with captaincy while also dealing with his own performance. He got a few things to work on technically. He is one of the best batsmen in Bangladesh we need to back him.

All said and done don't you feel it's high time we start winning Test matches?

Absolutely, we have got to start winning games. In saying that we have had two tough Test series against India and Pakistan with very poor preparation. I think in this Test match we are going in a lot better prepared than we had been in India and Pakistan, and as the coach, I feel more confident going in when I'm better prepared. However, as you mentioned, results are important and we need to win Test matches.

Do you feel the batsmen are getting exposed against quality pace bowlers?

We always felt that we can get Bangladeshi batsmen in trouble with good fast bowlers when I was coaching other teams. It is a mental thing, because guys do not play against quality pace bowling week in and week out on those type of wickets. It is a combination of both [mental and technical] change. We need to get better at playing quality fast bowling outside of Bangladesh. In Bangladesh, we are alright, given that there is no pace in the wicket but outside, we have a lot of work to do.

In that case, do you think we need to prepare wickets that help the pacers?

That is very difficult. Look at the square of Mirpur at the moment: there is no grass for the amount of cricket that is played there. There are some games of Bangladesh Premier League, BCL games and some women games too. We are not going to have any grass on it because it is overused.

We need to think smart and I feel we need to go out and prepare. We need to look at those options where we can prepare for tough conditions. Fortunately, we are playing all our Test matches in the subcontinent (in the immediate future) but going forward, we need to look at every possible option.

Can you explain why Bangladesh are failing as a batting unit in Tests?

Look, Saif played just one Test. Shanto played just two Tests and they are young boys. Then there is Tamim who has just come back to Test cricket. I do not know when he played the last time. However, above all our preparation in Test matches has not been good.

This time, the coaches are getting time to spend with the boys. The tour of Pakistan has been so short. In the last Test match against Pakistan, I actually felt sorry for the players because we had got one day to prepare for the Test match. I have never been involved in any team where we get just one day to prepare to play a Test match. We are planning to get more practice in before our next Test match in Pakistan, during the next leg of the tour which will also include some ODI cricket.

We have got to reconsider the way we do our scheduling and give our players a better chance of performing well. We are playing white-ball cricket and then with one day of practice, we are going to play a Test match. It doesn't work like that. How are we going to perform?

Was it tough to drop Mahmudullah?

It was not an easy decision. It's a decision that takes a lot of thought because he has been a stalwart of Bangladesh in all formats for such a long time. You have got to respect the players and what they have achieved. But at this stage, my focus is to develop the new sets of players like the Litons, the Mithuns, the Shantos and make them perform because you can't really rely on Mahmudullah, Shakib, Mushfiqur and Tamim for next 10 years. They young guys need to start putting up big performances.

How do you see the roles of spinners, because it appears we are focused on our pace unit?

Bangladesh's strength has always been spin and we are going to improve our fast bowling but we must make sure that there is always spin because that is our strength. I think we have got three really good finger0spinners for Test match cricket in Taijul, Nayeem and Miraz.

What do you make of the cricket culture in Bangladesh?

I am really enjoying it. As I have told you, I have not come here to change the world. There are certain things that you can change and certain things you can't change and you have got to go with the way things are done. It is definitely an impatient cricket nation. There is impatience and emotions when it comes to performances and maybe guys need to get better at balancing both. I am talking about the media, the board, the players and everybody. When you win it's unbelievable and when you lose, everything is wrong. You can't be so happy when you win and so depressed when you lose. Everybody needs to be more consistent dealing with success and failures - that's the only way a team can become consistent.

The challenge here is that it's such an impatient cricketing nation that if players make mistakes in one or two games, people want to get rid of them. And that something I want to change, because if the team wants to develop, you just can't get rid of players for his mistakes; because he is going to make mistakes. No one is perfect.