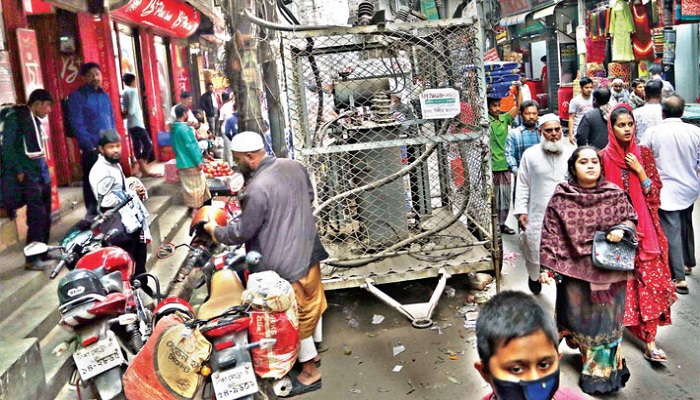 An electrical transformer of Dhaka Power Distributor Company (DPDC) kept in the middle of a busy and narrow street in the densely populated Islampur area of Old Dhaka is posing risk of accidents. The photo was taken on Monday. —MD Nasir Uddin

Many high-voltage electric transformers have been installed much below the normal height while buildings have been built awfully close to the electrical apparatus in various parts of the capital running the risk of fatal accident any time.

Electric transformers in many congested areas are easily reachable from homes for which accidents occur quite frequently.

Power supply officials said they are left with no option but to draw power lines in close proximity to the houses and the lines go even closer where the owners illegally extend their balconies.

Transformers are often installed at places where a large number of people gather. Transformer installation at such places invites danger.

Besides, a common sight is that power lines are touching balconies and windows of residential buildings.

Dhaka Medical College Hospital (DMCH) doctors said: “It was common for children to get injured due to electrocution while playing on balconies. We provide treatment to electrocuted children every day.”

In a recent visit to Islampur area in the old part of the capital, it was seen that an electric transformer was kept in the middle of narrow road, which has become narrower to the transformer, hampering movement of people and vehicles.

Locals said many small and big factories are located in Islambagh area while the roads are narrow here. Due to high demand many electric transformers have been installed in the densely populated area to meet their needs.

The main problem, said residents, is that the live power lines are easily reachable from homes particularly on congested lanes and by-lanes.

It is also mentionable that many makeshift shops are also setup under the roadside transformers in various places across the country also posing risk of fatal accident.

Many transformers were seen installed at low altitude. Traffic and people movement were put at risk due to the low height of the electric transformers. If any vehicles drive carelessly, accident may occur anytime.

Under the project, overhead cables will be replaced to aerial bundle cable, he added.

He said the risky transformers at Lalbag, Hajaribag and Kamrangichar have also been identified which will be also replaced with single poles within two years.