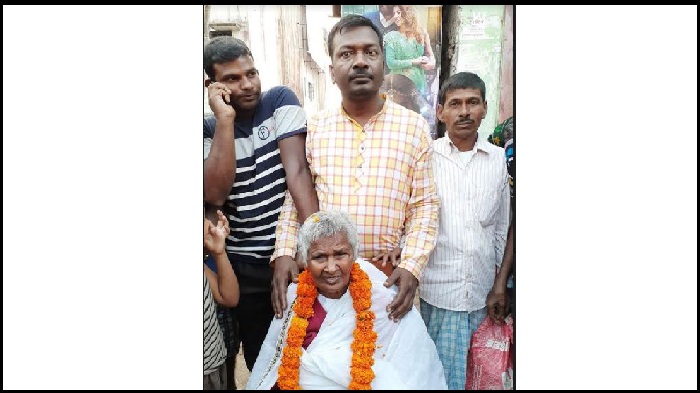 Seventeen years ago, Bakul Bala left home without saying anything in search of her daughter Alo Rani, who was then 16.  She never came back to her son Thakur Krishna Halder, who was then 28. Nor did the sister she went out looking for. In one evening, Krishna lost them both.

But, as fate would have it, Krishna finally got back his mother after 17 long years last Sunday - at Tital Intersection in Sabujbagh area of Patuakhali district town.

Bakul Bala was a resident of Talbaria village in Galachipa upazila of the district. She has two sons and two daughters in her family. Her elder daughter, Alo Rani, was married off at the age of 16.

After several months, the husband left Alo and fled to India. After that, Alo also left home in search of her husband and did not return home.

Ripon Chandara Halder, the grandson of Bakul, is studying at master's level at Patuakhali Government College. He is staying at a hostel in the district town for his study purpose. He grew up hearing the stories of his grandmother.

On Sunday, he found an elderly woman in Sabujbagh area when he was going to the district town. Interestingly enough, he found the woman resembling his grandmother as per the description that he heard from his parents in his childhood. Then he instantly informed the matter to his father.

Talking to UNB, Thakur Krishna Halder, son of Bakul, said, “My mother is a little bit mentally sick. She went missing when she left home in search of my sister. We searched her a lot in different places but failed.”

“I finally found my mother and I'm blissfully happy for the surprise. I'm grateful to the people who gave food to my mother during all those years,” he added.

Locals said barely four years ago, the elderly woman came to the area and some people found her standing in a small house.

Following this incident, Sharmin Akter Laiju, a hotel businesswoman, gave her shelter and food from her hotel.

At one stage, after several days, she gave the woman a sari and blanket to use, they added.

Kazal Baran Das, a resident of the area, said gradually over a few weeks, the elderly woman got acquainted with the locals.

She talks little and presumably nurses some mental illness. She used to get her meals from the nearby houses.

Later, some of the locals built a small house for her and she started living in the area. "We're very happy as she has got back her family after a long time," said a local.