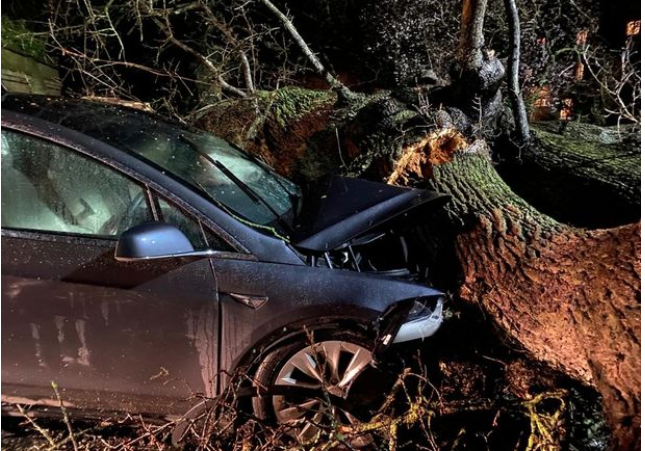 A dad of three has described the moment he thought his family were going to be crushed to death by a tree in Storm Dennis – but were saved by their Tesla car on Autopilot.

Laurence Sanderson was driving his wife Anna and their three children to Dorset for a half term holiday when the 400 year old Oak tree came crashing down as Storm Dennis battered the country on Saturday evening.

But luckily their £86,000 Model X Autopilot ''kicked in'' and slammed the emergency brakes on, saving their lives.

Incredibly, another Model X coming the other way was also crushed by the tree with the Autopilot function also saving the three occupants' lives.

Speaking about his family's brush with death, financial consultant Laurence said it was a ''miracle'' they survived.

Dramatic pictures taken by Laurence from the scene on the A31 at Sturminster Marshall show just how lucky his family including his children, Max, 12, Isabella, nine, and Rex, three, were.

He said: ''My wife is a bit battered and has two black eyes, a bump on the head and bruising to her chest but apart from that we escaped unscathed.

''We were driving along and out of the corner of my eye I saw the tree coming down. The car was on Autopilot and the emergency breaking kicked in.

'It was chaos with smoke coming from the car and people shouting to get out. People from other cars came to help get the kids out. It was an amazing response.

''Power lines came down and there were live wires at the back of the car so we were getting everyone to safety while being careful of them.

''My wife thought she was going to die when she saw the tree fall. I can't believe we're all still alive. Elon Musk has done us proud.''

Autopilot is an advanced driver assistance system that enhances safety behind the wheel. 8 external cameras, a radar, 12 ultrasonic sensors and a powerful onboard computer provide an additional layer of safety to guide drivers on their journey.

Autopilot uses these features to see and sense the environment around the car. This robust sensor and camera suite provides drivers with an awareness of their surroundings that a driver alone would not otherwise have. A powerful onboard computer processes these inputs in a matter of milliseconds to help make your driving safer and less stressful.

Active safety features made possible by Tesla's Autopilot hardware and software system include Automatic Emergency Braking which detects cars or obstacles that the car may impact and applies the brakes accordingly.

Speaking about the other car, Laurence, from Brentwood, Essex, said: ''In an amazing one a million chance another Tesla Model X car was also hit on the other side of the tree. The police have told me that all three are fine so eight lives have quite literally saved due to this amazing car.''

Construction company director Josh Whitelock, 31, from Wimborne, was driving the other Tesla with his girlfriend, Kitty McConnell and her mum, Julia as passengers when the tree came down.

''I was on Autopilot driving home when I saw a flash from the power line which lit up the tree as it fell. We stopped suddenly. There was a loud crack and then the sound of metal on metal.

''I was expecting to turn around and see my girlfriend and her mother impaled by branches but incredibly that wasn't the case. They were both ok apart from a bit of whiplash. It was a miracle we all survived.

''I helped get them both out of the car and then checked on the other driver on the other side of the tree. When I saw the open Falcon door I couldn't believe it.

'We were just in pure shock. Tesla has saved eight lives.

''It just goes to show that life can be over in a split second but thanks to Tesla making amazing cars that wasn't the case this time.''

Laurence said he was so thankful to the local community who came to the family's aid.

''Our car has been written off but the landowner has given us his Range Rover Sport to use until we get sorted.