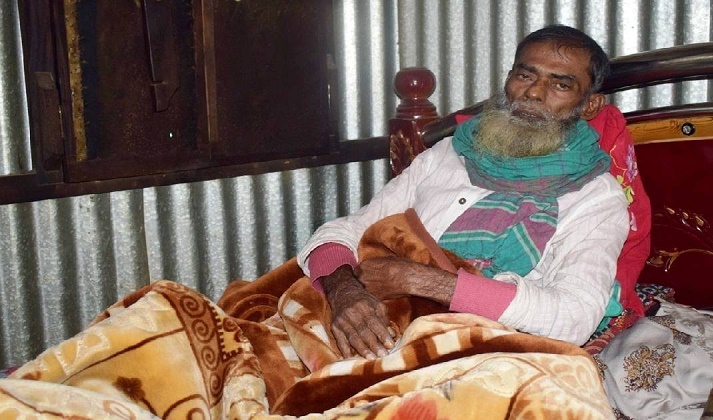 A freedom fighter, suffering from kidney and old-age ailments in the twilight of his life, is in dire need of financial assistance to cover his huge medical expenses.

According to a specialist doctor, one of his kidneys is totally damaged while it is 20 percent for the other. When he suddenly fell ill in June last year, Adom Ali went to Dhaka, was treated at Bangabandhu Sheikh Mujib Medical University (BSMMU) and then sent back home.

With teary eyes, Adom Ali told UNB that no-one of his fellow freedom fighters visited him after he seriously fell sick or extended a helping hand.

All of his three daughters have been married off while Adom Ali lives with his elderly wife, four sons and their family members. As no-one of his sons is educated and financially solvent, they struggle to make their ends meet and contribute to the family, let alone pay for their father’s medical expenses.

His eldest son could not pass the Secondary School Certificate (SSC) examination and now earns his living as a hawker in the district town. His second son Mizanur Rahman is mentally handicapped and incapable of working. Third son Kaus Mia is currently out of work and stays at home while youngest son Jalal Hossain is a student of Puran Bazar Degree College.

Adom Ali neither has any land property nor does he own agricultural land he can live off.

According to Adom Ali’s wife and sons, he was a very active person before his illness. They find it extremely difficult to see his health deteriorating day by day. “We’re too poor to pay for his treatment,” his wife said with tears rolling down her cheek. “We appeal to the prime minister so he can receive proper treatment.”

While recalling the Liberation War in 1971 and Bangabandhu Sheikh Mujibur Rahman, Adom Ali’s trembling voice became stronger and expressed his love and admiration for the Father of the Nation. Like many others, he was inspired by Bangabandhu’s historic March 7 speech and left his home to join the Liberation War.

Adom Ali recalled some successful operations carried out under the leadership of his commander Syed Abed Mansur. However, he became emotional while talking about his fellow freedom fighters as they have forgotten him and never came to see him.