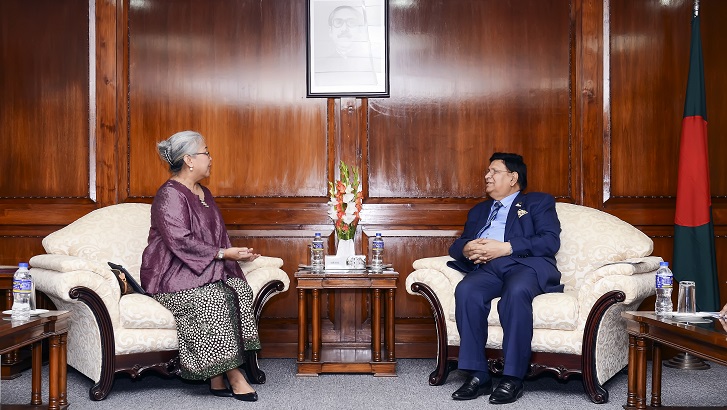 Foreign Minister AK Abdul Momen has urged Indonesia to remain pro-active in the ASEAN platform to convince Myanmar for creating a conducive environment for a safe, dignified and sustainable repatriation of the Rohingyas.

He told this when the Indonesian Ambassador to Bangladesh Ms.  Rina Prihtyasmiarsi Soemarno called on the Foreign Minister at the Ministry of Foreign Affairs yesterday (on Sunday).

Foreign Minister Momen also suggested that an ASEAN led observer team may be deployed in the Rakhine State to oversee the repatriation process.

In response, the Ambassador assured to remain engaged on the issue and continue Indonesia’s support for a durable solution to the crisis.

The Foreign Minister thanked Indonesia for the humanitarian support extended to the Rohingyas and sought political support from Indonesia on the repatriation issue. Welcoming the Indonesian envoy, Momen said the warm and friendly bilateral relations between the two countries who are bound by common religious, cultural and historical traits.

Terming Indonesia as Bangladesh’s important bilateral trading partner, he suggested that the imbalance in trade could be reduced if Indonesia invests in Bangladesh where a business friendly environment is prevailing.

The Foreign Minister He mentioned that the purchasing power of Bangladesh’s growing middle class has enhanced significantly in recent decades and also Bangladesh is surrounded by two giant economies of India and China.