Algeria to reopen its diplomatic mission in Dhaka soon 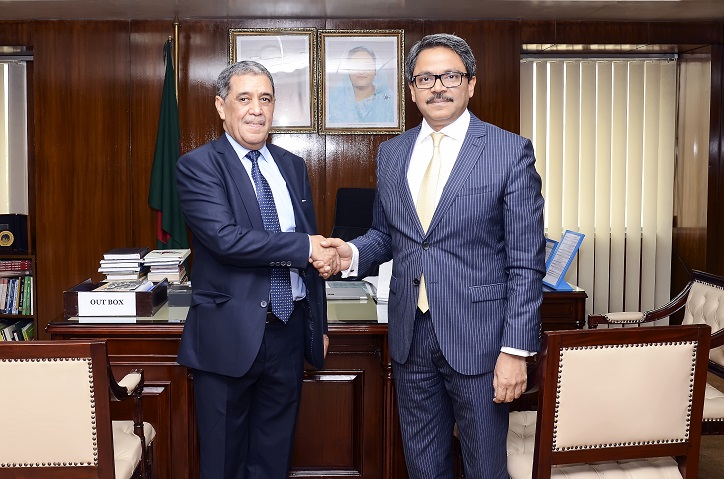 Bangladesh has welcomed the Algerian government’s decision in re-opening their resident diplomatic Mission in Dhaka on the eve of the birth centenary of the Father of the Nation and of the Golden Jubilee of Bangladesh’s Independence.

This was stated by Foreign Minister AK Abdul Momen and State Minister for Foreign Affairs Md. Shahriar Alam when the newly appointed Ambassador of Algeria to Bangladesh Rabah Larbi made call on yesterday (on Sunday) at their respective offices at the Ministry of Foreign Affairs. The new Ambassador presented his credentials to President of Bangladesh Md. Abul Hamid recently.

Both the Ministers recalled with happiness the historic visit of the Father of the Nation Bangabandhu Sheikh Mujibur Rahman to Algeria to attend the Fourth NAM Summit in September 1973 and appreciated the Algerian government’s gesture in preserving the honoured memory of Bangabandhu’s historic visit through dedicating a corner in the Palace of Nations in Algiers for displaying his pictures and sayings.

They discussed the entire range of bilateral relations based on commonalities of history, tradition and religious faith, the Foreign Ministry said.

The two Ministers reiterated Bangladesh’s willingness to strengthen bilateral ties with Algeria for enhanced substantive cooperation in the fields of trade & commerce, socio-economic development and people-to-people contacts to the mutual benefits of the two brotherly countries.

Both of them also hoped that the re-opening of the Algerian Mission in Dhaka on the eve of the birth centenary of the Father of the Nation and of the Golden Jubilee of Bangladesh’s Independence would usher in newer avenues of bilateral cooperation.

They reminisced about the close friendship between the Father of the Nation Bangabandhu Sheikh Mujibur Rahman and the then Algerian President Huari Boumedienne and expressed hope that their legacy will be followed to revitalize the bilateral relations through increased interaction and engagement.

The Foreign Minister further requested the Algerian Ambassador to explore opportunities for cooperation in energy, air connectivity and skilled manpower, among other potential sectors and emphasized on the importance of exchange of visits both at public & and private sector levels to reap the benefit of people-to-contacts.

They appreciated the Algerian government’s decision in re-opening their resident diplomatic Mission in Dhaka in reciprocity of re-opening Bangladesh Mission in Algeria in 2016. Both the Foreign Minister and the State Minister for Foreign Affairs wished Ambassador Larbi a successful tenure in Bangladesh.