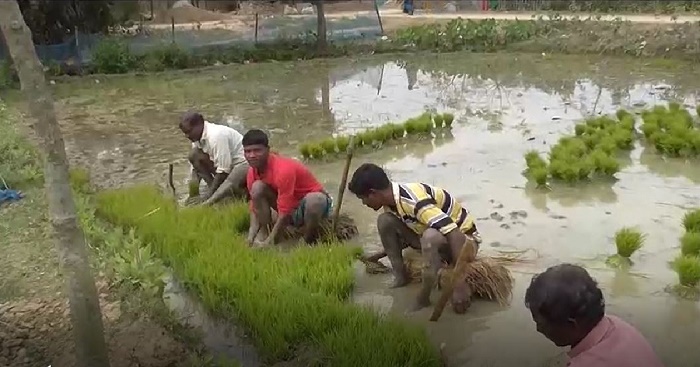 Farmers in Chapainawabganj, who complained about not getting the fair prices of paddy in Aman  season, are now busy with boro crops hoping to recoup  their losses but some of them are apprehensive of another bad season.

There is no shortage of fertiliser, seed and irrigation, but farmers are worried about getting fair prices.  They said bringing down the prices of fertiliser and cost of irrigation will be helpful for them.

“We’ve been incurring losses for the last few years,” said Aminul Islam, a farmer from Bechenda area of Nachol upazila. He took loans for cultivating paddy but could not pay installment.

The price of aman was far below their expectation, the farmers said. In the 2018-19 fiscal year, Bangladesh produced 153.363 lakh metric tonnes of aman rice against a target of 140.839 lakh metric tonnes, according to the annual report of the Department of Agricultural Extension.

Many farmers say they are losing interest in boro because of the losses in the aman season.

Mofiz Uddin of Dhorbona area under Shibganj upazila said he cultivated aman on 10 bighas by taking loan. But he could not repay the loan due to low prices of the paddy. He incurred a loss of Tk 10,000.

“This time, I’ve cultivated boro on two bighas to meet my family’s demand. I won’t cultivate paddy if the price does not increase. What will I do if paddy prices don’t rise? Fertiliser, pesticide and labour cost are increasing, and so there’s no point in growing paddy,” he said.

“We don’t get any profit,” he complained. “It’s good that the government is providing fair prices of paddy but not everyone is being benefitted.”

Manjurul Huda, Deputy Director of Department of Agricultural Extension, told media that this year the government eyes boro cultivation on 46,800 hectares in Chapainawabganj and produce 2,16,526 metric tonnes of rice.

“The weather is good and there’s no shortage of seed, fertiliser and irrigation. So far, 27,050 hectares was cultivated,” he said.

Huda, however, did not say what steps are being taken to avert a repetition of the bad aman season but noted that they are monitoring whether rice mill owners are procuring paddy at fair prices.