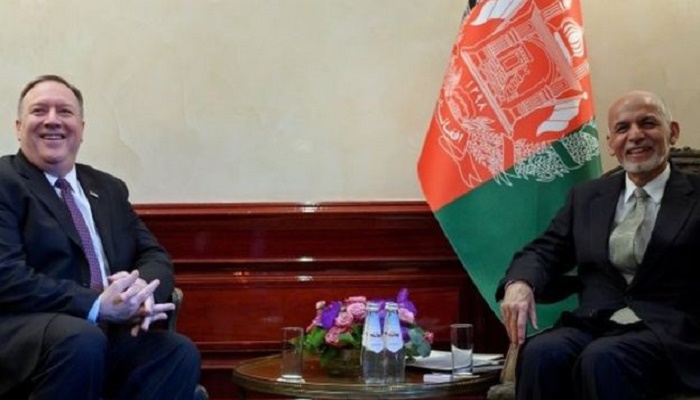 In the margins of the Munich conference, US Secretary of State Mike Pompeo met Afghan President Ashraf Ghani.

Subsequently, a senior US official set out some of the deal. A seven-day truce agreement between the US and the Taliban in Afghanistan will come into effect very soon and could lead to withdrawals of American troops.

The official said the initial agreement on a reduction in violence would be followed by all-Afghan peace talks within 10 days and would cover the whole country.

US Defence Secretary Mark Esper later said that "a significant part of our operations" in Afghanistan would be suspended, but added that the "clock has not yet begun" and that further consultations were needed to set the date.

That is an ambitious opening gambit. The talks appear to have been extremely detailed. Violence against both US and Afghan forces is included, and US officials say that the specifics of what defines violence are down on paper.

There would be a communications channel between the US and the Taliban; an acceptance that there may be violence from other sources and each and every incident will need to be clarified.

Indeed, there are monitoring and verification provisions throughout.

In the longer term the Taliban is said to have agreed not to host, train or fundraise for international terrorists in the areas they control.

The talks between the Taliban and the Afghan government will begin with the discussion of a "permanent and comprehensive" ceasefire.

So far so good - but there are hints here already as to what might go wrong.

It is still not entirely clear exactly who the US is talking to and to what extent they represent or speak for all Taliban elements.

There are all sorts of other armed groups in Afghanistan eager to stir up trouble.

Can any peace process really be insulated from them?

It's not clear yet where Pakistan stands in all of this or the extent to which will be wider regional framing for any settlement.

One thing we do not know yet is the exact pace or sequencing of any US troop withdrawal.

Would any residual US forces remain? US officials appear to be hoping that such a force would not be required.

But perhaps the biggest question outstanding is can the Taliban really be trusted to deliver on any deal?

And once they have the US on its way, will they honour any broader peace agreement within Afghanistan itself ?

What US sanction might there be if they don't?

But we are getting well ahead of events here. What the Americans are clearly hoping for is some quick and early sign that the Taliban are serious.

A week's cessation of violence is the route into the process. Many US analysts fear that President Trump, for his own political reasons, is rushing for the exit.

Few Americans will be sorry that the longest-lasting campaign of the "forever wars" may at long last have a chance of ending.

Writing earlier this week, veteran US defence expert Tony Cordesman raised concerns that the "peace" being sought by President Trump might rather be the "Vietnamisation" of a US withdrawal.

There are many warning signs," he noted, "that this peace effort may actually be an attempt to provide the same kind of political cover for a US withdrawal as the peace settlement the US negotiated in Vietnam."