Young Tigers’ World Cup win: A triumph in the works for years 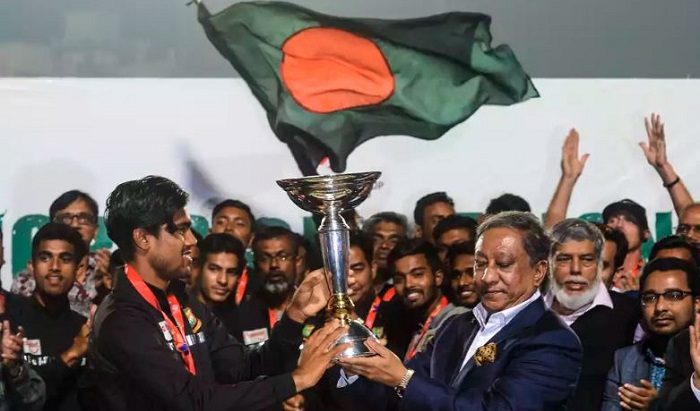 There is a festive mood all around Bangladesh's cricket fraternity since they clinched their maiden ICC Under-19 World Cup trophy, beating tournament favourites India in the final at Senwes Park in Potchefstroom in South Africa.

The young cricketers have received a lot of accolades for their achievements at home and abroad, and now the BCB have initiated a move to prepare them better for the highest stage by introducing an Under-21 platform for them.

It will be an extended version of the plan that was laid down by Game Development chairman Khaled Mahmud right after their loss in the Under-19 World Cup semi-final to West Indies at home in 2016.

BCB broke away from their previous norm of preparing a squad without any proper goal in place. In head coach Naveed Nawaz, Bangladesh got a man to travel the difficult long road as the board trained their entire focus and energies towards the World Cup in this time frame - since his appointment in July 2018.

"I came up with the plan probably two or two and a half years back when Papon [Nazmul Hasan, BCB president] asked me what do I want to do to become a champion at Under-19 level," Mahmud said.

"In a crunch moment we lost it. Like in a tough over, because we did not have that maturity or experience inside. So what we decided... how many matches can we play [during this time frame], because if we play more matches, it will let the boys get mature and gain experience," he said.

"I think, if you don't play enough matches, then the understanding of the match will not be there. They played around 35 matches [prior the World Cup] to become a better cricket team with good unity and good understanding of the game, mentally stable in tough situation," he added.

"We came out with the concept before the World Cup, we spoke to the boys [and they] came out to the concept that, we clean our own mess. We do make mistakes then we rectify them. I think the boys, specially the captain, responded really well. From the start, even if we were training, we won't leave a bottle in the space we train. We put everything in the bins, and we clean our mess. Even if we have a meeting, after the meeting is finished we clean the place and put the chairs back," Naveed said.

"These are the small steps that can go a long way. Also something that we spoke about was looking after each other. As a batting group, you got seven batsmen in your team playing and it is bound to happen that three or four batsmen are going to fail everyday. It will happen. I don't know who but somebody is going to fail. We said, if three fail then the other four will have to cover up for them. You do their job. One day you are going to fail and someday else will have to do your job," he said.

This realisation of cleaning their own mess and taking up responsibility for each other came up in the aftermath of their loss against India in the Youth Asia Cup final when they fell short by five runs in a small chase of 107.

"I saw Asia Cup final, when we went into bat chasing 107 runs, they were all over us. Our boys did not have the time to even think. They were banging the ball short, coming and screaming in the batsmen's ears, they played really aggressive, even in England. So it's not the skill, it's the mentality. It's your mental strength and how hard you can push your opponents and things like that, so we learn," Naveed said.

The Sri Lankan added that he was lucky to have Mahmud beside him as he helped him fix the holes by spotting the right talent due to his involvement in different sectors of domestic cricket. "I think he knows who are around. So it's easy to pick somebody... and his knowledge of the game. Because it's a team work and at the end of the day the selectors and Sujon bhai, we all worked as team," Naveed said.

Mahmud admitted that he played his part in the selection process, to the extent of ensuring the selectors picked players like Tanzid Tamim and Hasan Murad.

"I spoke with selectors. In the initial pick Tanzid Tamim was not in the squad. I asked why this boy is not in the squad, he is playing some good cricket, he is a proper one-day cricketer, he will definitely be my first choice. Then they went and saw Tamim and picked him in the squad. Then I did not see Hasan Murad in the squad. I asked how old is this boy, I saw him playing in Dhaka Premier League for BKSP in two matches. He is unbelievable, his economy rate is under four in Dhaka league which is very good for a youngster, and they picked him. Akbar was a late addition as well," Mahmud said.

"We needed two good spinners, who can contain and get wickets. So what happened while they bowled in tandem...that's a practical move from us. In those two matches [after South Africa game], when Hasan bowled with Rakibul, Hasan did not get the wickets but Rakibul got the wickets. But Hasan contained it really well. He bowled against the left handed batsmen as well," he said.

According to Naveed, just having a balanced side was not good enough to beat India in the final and hence, they decided to fight fire with fire.

"We've lost to them [India] two-three times, but we learned. We beat them in England once in the same way. So that's the decision - that we need to play bit of aggressive cricket. We did a bit of study of their batsmen as to where we should be bowling. But our main plan was if we can match these boys up to their attitude...," said Naveed.

Mahmud added that he instructed his boys to take the pressure and deliver in the middle in the final.