Australia weather: How much rain did it take to put out NSW fires? 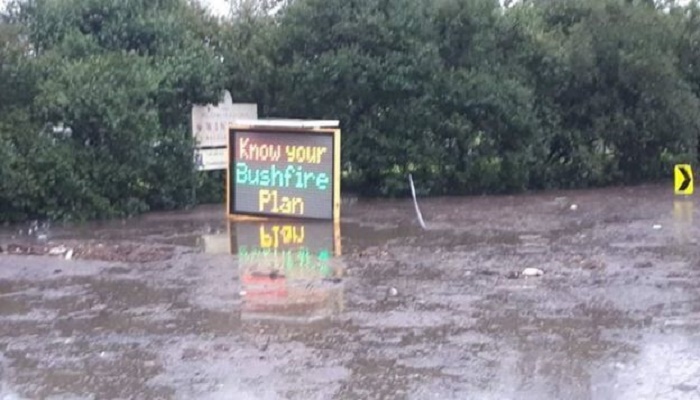 Since July there have been fires - sometimes hundreds at once - burning across New South Wales, Australia's most populous state.

Firefighters have battled mammoth blazes daily during the state's longest bushfire season. More than five million hectares have burned, in conditions worsened by years-long drought and record heat. Dozens of people have died across the country.

A massive dump of water - more than 400mm (15.7in) in some places - caused flooding and transport chaos, but also helped finish off many of the fires.

On Thursday, authorities announced with delight that every single fire in the state had been contained. This means the perimeters of the fires have been "boxed in" and while some areas are still alight, the blaze is under control and won't travel freely.

The majority of fire grounds up and down the coastline received the heavy drenching that was much needed - with many getting over 300mm in just one weekend.

Take for example the town of Nowra, in the state's south, which was the scene of ferocious blazes back in January.

The rain has been described by some as a miracle - particularly given the long-term forecast for the summer had predicted an 80% chance of below-average falls.

Three years of severe drought across the state had left forests tinder dry, making it too easy for fires to race into new areas.

While there had been some rain before last weekend, those isolated showers couldn't effectively dampen the ground and reduce the risk of fires re-igniting.

"Even when we did have some significant falls of 30 or 50mm, it wasn't enough," Simon Heemstra from the Rural Fire Service (RFS) told the BBC.

"Generally if you get even 20mm, you'd be happy about it slowing down and putting out a lot of the fire.

"But because it was so dry you could be getting 50mm and that rain would just be absorbed very quickly. And within a couple of days that vegetation had dried out again and started burning again."

The RFS's fleet of water-bombing aircraft, up against "megafires" the size of small countries, could only have limited impact on such a landscape. At least two of the fires had scorched more than 500,000 hectares by the time they went out.

But because the rain was heavy and came down steadily over the weekend, it could soak into parched vegetation and seep deep into the soil, rather than just running off.

"Because it was sustained over a long period of time, we're seeing it broadly throughout the landscape," said Mr Heemstra.

"You'd probably need hundreds, even thousands of drops from planes to achieve the equivalent of a good amount of 30-50mm rain.

"The quantity you would need to address those burning materials across those grounds is just enormous."

Furthermore, a water drop from a plane is just "one short, sharp drop" - meaning the ground can't properly absorb it. Sometimes that water would also blow away because of winds around the fire.

While the rains caused intense flooding and whipped up surf that damaged areas along the shore, the downpour did help fill up reservoirs and dams desperately needing it.

Sydney - the nation's largest city - has been under water restrictions since late last year, when its dams fell below 45% capacity.

But the city could see an easing of some of these limits now the dam at Warragamba, which supplies 80% of its water, has filled up.

More heavy rains are expected this weekend, with forecasts saying many of the state's rivers will burst their banks again, while inland areas may even receive hail.

Severe storms are also set to batter neighbouring states of Queensland and Victoria with cyclonic winds and more damaging surf. However, firefighters will be looking to the silver lining in this cloud.

Already, the NSWRFS command headquarters in Sydney has been turned into the chief station for storm relief operations. More firefighters were out last week working on rescues than at fire grounds.

"From now on, we're hoping all this continued rain will just benefit everything we've already done," said Mr Heemstra.

"Here's hoping that we cross that finish line."