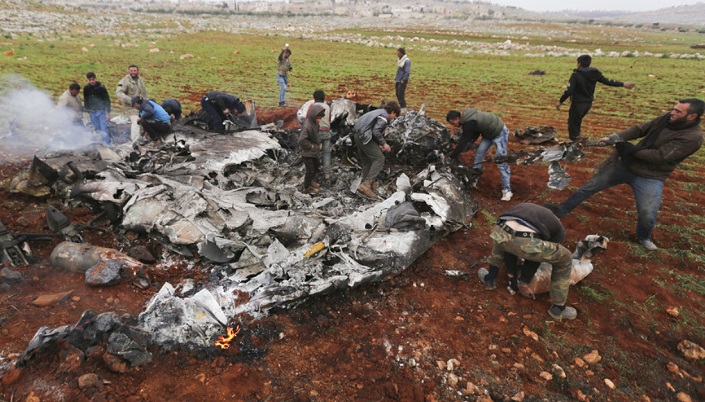 Syrians gather around a wreckage of a government military helicopter that was shot down in the countryside west of the city of Aleppo, Friday, Feb. 14, 2020. Photo: AP

A government helicopter was shot down and its crew killed Friday in Syria's northwest, where a military offensive against opposition fighters is unfolding, a Syrian military official and activists said.

Videos posted online show a helicopter spiraling downward from the sky, with flames trailing behind as onlookers cheer.

A military official told Syrian state media that the helicopter was hit by a "hostile rocket" in the western countryside of Aleppo province. The unnamed official said the helicopter crashed and its crew was killed.

A Syrian military offensive in the region is seeking to uproot opposition fighters from the last territory they hold.

The Britain-based Syrian Observatory for Human Rights, which has a network of activists on the ground, said the helicopter was downed Friday in the village of Qibtan al-Jebel, north of Aleppo city. It said two crew members were killed and their bodies were found near the site of the crash.

It was not clear who downed the helicopter or how. Insurgents were believed to be behind the Tuesday downing of a helicopter in which the 2-member crew was killed.

The Observatory said the helicopter was downed Friday by Turkish military forces stationed in the opposition-held region. There was no immediate comment from Turkey.

Turkey's state-run Anadolu Agency said only that a helicopter belonging to Syrian President Bashar Assad's forces was brought down in the western Aleppo countryside.

The agency said the helicopter took off from an area near the Aleppo city center amid "clashes between the opposition and regime forces" and was shot at from the Qibtan al-Jabal region. It was seen crashing, unleashing a plume of smoke, the agency reported.

Insurgents have sought to acquire portable defense systems to target government warplanes, often acquiring them from seized stockpiles or from outside supporters.

Turkey, backer of Syria's opposition, has been deploying equipment and troops in the region, which is home to more than 3 million people, in an attempt to halt the Syrian military's advances. But the increased Turkish footprint has also resulted in confrontations with the Syrian troops and clashes between the two sides have killed 13 Turkish military personnel and 13 Syrian troops.

The violence has displaced 800,000 people since Dec. 1 in one of the largest single waves of displacement ever in such a short period. Many of the displaced are living in the open, in tent settlements in sub zero temperatures.