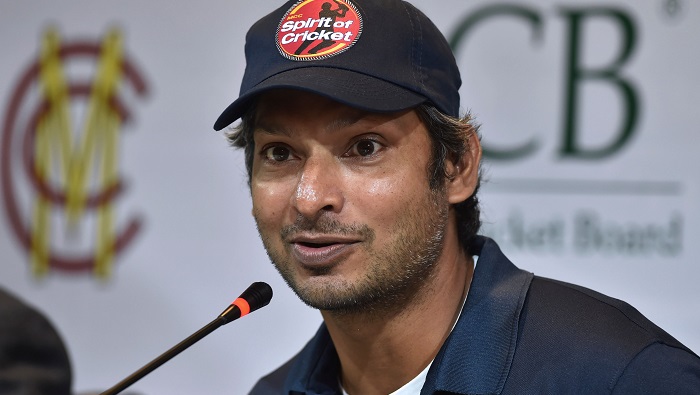 Former Sri Lankan cricketer Kumar Sangakkara and Marylebone Cricket Club (MCC) president speaks during a press conference in Lahore on Friday ahead of a four-match tour as part of efforts to revive international cricket in Pakistan. –AFP

Sri Lanka great Kumar Sangakkara will relive his fateful 2009 journey to Lahore's Gaddafi Stadium on Friday after returning for the first time since the deadly attack which plunged Pakistan into cricket isolation.

Sangakkara is captaining England's venerable MCC for four games in Lahore, where he was wounded in a militant attack on the Sri Lankan team that left eight people dead in March 2009.

International cricket is only now returning to Pakistan, who hosted Sri Lanka late last year for their first home Test series since the guns-and-rocket attack.

Sangakkara, 42, suffered shrapnel wounds to his shoulder and narrowly escaped a bullet which whistled past his head as the Sri Lankan players lay pinned down on the floor of the team bus.

But Sangakkara, who is also the president of the Marylebone Cricket Club (MCC), said Pakistan was slowly restoring its reputation as a safe destination for visiting teams.

"Security is always a major concern everywhere in the world," he said after arriving in Lahore on Thursday.

"I think the steps that have been taken in Pakistan over the past few years have instilled a great amount of confidence in the cricketing nations.

"I think slowly and surely that confidence is building up and the more times international sides tour, that message becomes stronger and harder to ignore."

The few international games in Pakistan have been guarded by tight security, with snipers on rooftops, roads sealed off and heavily armed patrols.

But Sangakkara, one of the world's best batsmen of the past two decades, said playing in Lahore sends out a powerful symbol.

"I think the best thing is to send the message by the way we play on the field," said Sangakkara.

"I am happy that we are able to play our part to try and encourage countries to look at Pakistan as one of the best cricket destinations.

"It has been in the past and I am sure it will be that again very soon."

The MCC will open their tour with a Twenty20 match in Lahore on Friday. The remaining matches will also be played in the city on February 16, 17 and 19.