20,000 char families thrilled as electricity set to pour into their villages 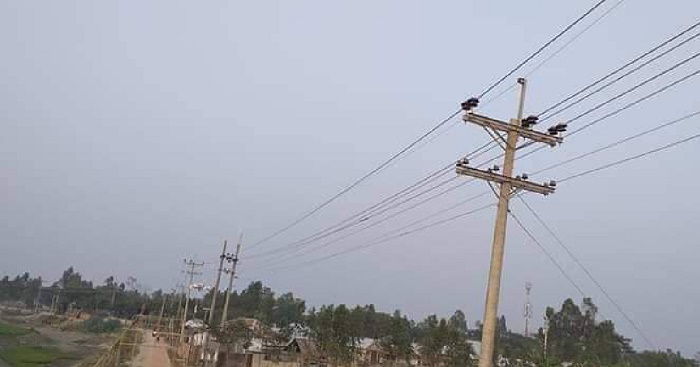 Around 20,000 families in erosion-prone Naria and Bhedarganj upazilas of Shariatpur passed their entire lifetimes in the dark once the sun went down, using Kerosene lamps to complete essential tasks with the constant howl of the mighty Padma and Meghna rivers ever-present.

Those days in the darkness are finally about to be left behind in the char areas: starting Saturday, their homes are set to be lit up by electricity travelling via submarine cable beneath the Padma from Munshiganj district.

Visiting Choratra and Nawapara unions in Naria upazila and Kachikata union in Bhedarganj upazila, the UNB correspondent encountered locals looking bright and full of optimism at the prospect of electricity set to pour into their villages soon, and quite literally, light up their lives.

About 72,000 people waited for long, but aiming to put an end to their bitter waiting, Deputy Minister for Water Resources AKM Enamul Haque Shamim is scheduled to inaugurate the electricity supply on Saturday.

About 33KV electricity will be supplied for 1,000 families in the first phase on Saturday and another thousand families will get it in the next phase, he added.

He also said that a sub-station of Palli Bidyut is under construction at Nawapara union.

According to Shariatpur Palli Bidyut office, the setting of submarine cable for electricity supply started after Bangladesh Palli Bidyut Board approved it on February 12 in 2019.

The people of Choratra, Nawapara and Kachikata unions said they have been living there for over 70 years and used Kerosene lamps at night all these years.

Rashed Asgar Shohel Munshi, chairman of Nawapar union, said, “I never thought of getting electricity in this remote union.”

Julfiqur Rahman of Shariatpur Palli Bidyut Samity told UNB that they are providing electricity by submarine cable in three chars under Shariatpur district.

“Due to short distance from Munshiganj district, we decided to supply electricity from Munshiganj,” said Rahman, confirming that a substation is already under construction.

Deputy Minister AKM Enamul Haque Shamim told UNB that it was his election promise to his voters to bring them under electricity coverage.

Besides, it is a pledge of Prime Minister Sheikh Hasina to provide electricity in every village of the country, the deputy minister added.

Shamim also said electricity for remote char areas is a special gift from the Prime Minister in of ‘Mujib Borsho’, the birth centenary of Father of the Nation Bangabandhu Sheikh Mujibur Rahman.