US Senator Kennedy in Bangladesh 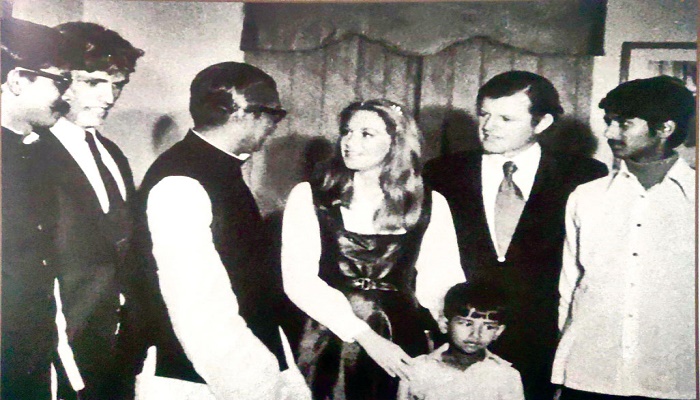 American Senator Mr. Edward Kennedy came to Bangladesh on 14 February 1972 on a two-day visit. Senator Kennedy had, by that time, become a very popular personality to the people of Bangladesh for raising his voice against the US government for directly helping Pakistan in continuing its atrocities in Bangladesh as well as maintaining Pakistan approached policy. There was doubt whether the aircraft carrying Mr. Kennedy and his delegation would be able to land as scheduled due to bad weather in Dhaka on 14 February morning. However, a large crowd of admirers, many of them college and university students, had turned up at the Tejgaon airport despite chilly and cloudy weather. Senator Kennedy was very overwhelmed to see the way he was welcomed by the students and general mass at the airport as well as Dhaka University campus in that weather.

In the afternoon, Senator Kennedy had addressed a large gathering of thousands of students at the Dhaka University campus. Referring to the struggle for self-determination of the struggling people of Bangladesh, he said that Bangladesh was an example to those countries who did not believe in self-determination. He said, "I have come to Bangladesh to bring you the prayers and hopes of millions of people of the United States of America and I am proud to stand here at Dhaka University, long symbol and focus of the Bengali struggle for self-determination, and the first target of those who have sought to repress that freedom.  Even though the US government was not with you, the American people supported Bangladesh's Liberation War. We are brothers in liberty, and no man, no policy, no government, can change that fact.”

Mr. Kennedy said that the American people were proud to stand with those who struggle for liberty, for human dignity and for the noblest aspirations of man. He said, “You know that while some government do not recognise you, the people of the world do recognise you and they recognise all you have accomplished here in the name of freedom from tyranny and oppression.”

Senator Kennedy regretted not being able to visit Bangladesh in the past, saying, "The military junta of West Pakistan did not allow me to enter. Maybe they were afraid for the world to see inside Bangladesh’s borders. I was troubled, as the world was troubled by the sufferings of your people, and now, I rejoice, as the world rejoice, at the bright new chapter you have written in the history of liberty on earth.”

Quoting Tagore’s ‘Where the mind is without fear, ............, let my country awake’, Mr. Kennedy said, “Freedom is your and the future belongs to the people of a new Bengali nation. For generation to come, the story of Bangladesh will be a lesson to the world. The birth of the Bengali nation will be an inspiration to the people in other lands, a symbol to all who share your love of life and the spirit of your courage, but you did not yet share your freedom.”

Comparing America’s history, Senator Kennedy said that there were many similarities between America and Bangladesh. He said, “Like you, a powerful and established government was determined to deny us freedom. Like you, our early leaders endured terrible adversity before their cause prevailed. Like you, once the new American nation was born, there were those who said that such a weak and impoverished country could not survive in the modern world. They thought our great experiment in freedom would surely fall. And yet we confounded all their wisdom. We were poor in everything but hope and courage.”

He said, “We had no wealth, but we had resources far more valuable and important. We had people with the energy and commitment to make our nation strong and leaders with vision to see the way and help the people build their future. The revolution in America did not end in 1776. It did not die with Washington and Jafferson. It lives today in our efforts to fulfil the goal of liberty and equality for all citizens, black and white alike. And it lives as well in the hopes we share for those who are oppressed in other nations.”