Explore the less explored side of Dooars 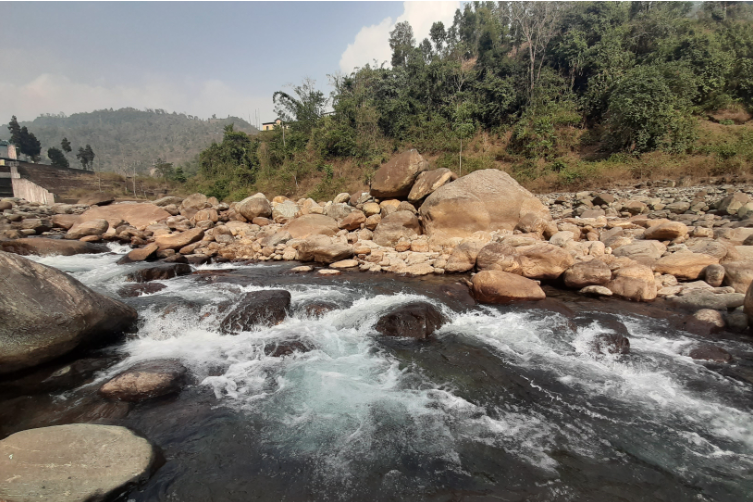 The name, Dooars, is sometimes only associated with jungle and wildlife although the greeneries of foothills of the eastern Himalayas in northeast India has a peaceful connection with Bhutan through a shy river named Jaldhaka. A deep dive within the route uncovers a less explored side of touring India.

The Jaldhaka Rivers flows at a tremendous speed along the Bhutan-India border. A lovely route towards the barrage holds memorable spots like Samsing, Jhalong, Suntale Khola and many more. The origin of the trip, Gorumara Jungle Resort, itself is only 13 kms away from Gorumara National Park.

The assistant manager of the resort, Mihir Roy, told UNB that the famed location is mainly visited by film crew.

“Within the next few days, the spot will be used as filming location for an upcoming movie. But the beauty and the serenity of Dooars never loses the charm,” he said.

A jeep took us to Samsing, the first stoppage of the trip, on the second day after arriving at the resort.

The small hamlet, Samsing, had cozy people and a gorgeous view of surrounding tea estates and hills. It is located 3000 ft in the foothills in between Jalpaiguri and Darjeeling districts. It is known for its beautiful landscape with green tea estates, hills and forests that attract a lot of tourists.

It is the home to more than 4,000 people and its climate is noted for fog and cool breezes. Lali Guras and Suntaley Khola are the two key spots that I visited in Samsing.

Lali Guras offers a wide view of the Murti River as it lies near Suntaley Khola and the river viewpoint about 3 kms from Samsing. Flanked by the river and a serene, green landscape, the spot offers the perfect relief to weary city dwellers looking to escape from the drudgery of their daily mundane routines.

Suntaley Khola, part of Samsing at 4 km trekking distance, had a mountaineering stream that passes under the hanging bridge. An interesting fact is that the Suntaley Khola lodge is accessible via that bridge only.

Following the crisscrossing and meandering roads in-line with the Murti River, the jeep took us to Gairibas viewpoint at Jhalong where we first glanced at the lovely Jaldhaka River separating India and Bhutan.

A short stoppage there introduced the landscape of Bhutan Mountains and settlements on both sides of the river.

The Bindu barrage was the final stoppage of the trip and at the heart of Bhutan-India border where three streams of Bhutan named Dudh Khola, Bindu Khola and Jaldhaka connect and reemerge as Jaldhaka after crossing the dam.

The dam is part of a hydroelectricity plant at Bindu. Visitors are not permitted to visit the dam but photographing the dam was allowed. A Bhutia settlement was visible on the other side of the plant.

The Jaldhaka waterway is a mix of said three streams originating from the same glacier in Himalayans. The Jaldhaka streams over Jalpaiguri and Cooch Behar before going to Bangladesh near Mathabhanga through the Cooch Behar region.

In Cooch Behar area, the stream takes the name of Singimari. In its course to Bangladesh, the Jaldhaka River again changes the name to Dharla and streams into Brahmaputra in Kurigram.

The population near the border is scarce but welcoming as a small number of shops selling various foods and souvenirs were operated by the locals. They generally had a positive impression about the peaceful and jolly environment of the Indo-Bhutan border.

The importance of the trip lies in an alternative route of tour-hungry Bangladeshis to visit not only the ever-enchanting forestry of Dooars, but also to get to see the amazing views of spots like Samsing, Jhalong and Bindu all in cooperation with the always welcoming locals.

The easiest route to Dooars and surrounding areas is to enter through Banglabandh land port and visit Siliguri, India. From there, the passage towards the Gorumara National Park has a variety of resorts for holidaymakers and rest is fairly simple through tour packages.