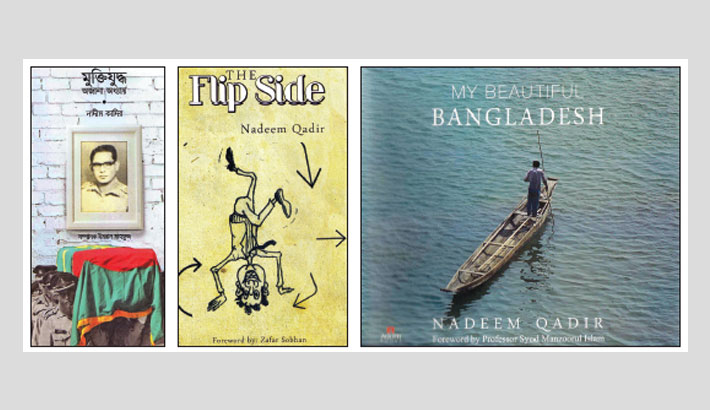 Three books of eminent journalist Nadeem Qadir, published over the past several years and have been praised by critics are again available in the ongoing Amar Ekusher Boi Mela- 2020. The three books are ‘My Beautiful Bangladesh’(ADORN), ‘The Flip Side’ and ‘Muktijuddho: Ajana Oddhaya (Jagriti Prokashoni)’.

“I am happy that the books are still in circulation,” Qadir told this correspondent, thanking the three publishers.

He said he is working on three more books for the next Boi Mela in 2021.

Among the three books, ‘My Beautiful Bangladesh’ showcases individuals and places to show the positive side of this South Asian country. Dedicated to the Father of the Nation, Bangabandhu Sheikh Mujibur Rahman, it has special focus on the country’s armed forces, while war women are seen as nation’s pride by the author. It is the author’s effort to uphold the beauty of Bangladesh’s people and places. The country’s branding as ‘Beautiful Bangladesh’ was taken from this book’s first edition in 2006.

On the other hand, ‘The Flip Side’ is to bring together his thoughts on different issues over a period of two decades. It will help readers reflect back on the days gone by and how it affected him not only as a journalist but also as a concerned citizen of Bangladesh.

In those days, journalism was a tough business, only for the intrepid and daring few. It meant long hours and low pay. It was dangerous and not the type of job that means numbers or arithmetic.

While, his third book, ‘Muktijuddho: Ajana Oddhaya’ about the 1971 Independence War, the time he spent after his father  Lt. Col. M. Abdul Qadir, who was a 1959 commissioned officer of the Pakistani Army, was killed. The thrust is his long 36-year search for his missing father which ended in 2006 when he traced his grave.

He was involved in the Bengali independence movement and had met Bangabandhu Sheikh Mujibur Rahman in 1968.

Nadeem Qadir is currently the Consulting Editor of the Daily Sun, one of the leading English dailies of Bangladesh. He is the recipient of the Dag Hammarskjold Memorial Scholarship of the UNCA, one of the most prestigious in international journalism and worked the Reader’s Digest magazine, Agence France Presse (AFP), Press Trust of India (PTI), TV South Asia and Outlook magazine of India, to mention a few.