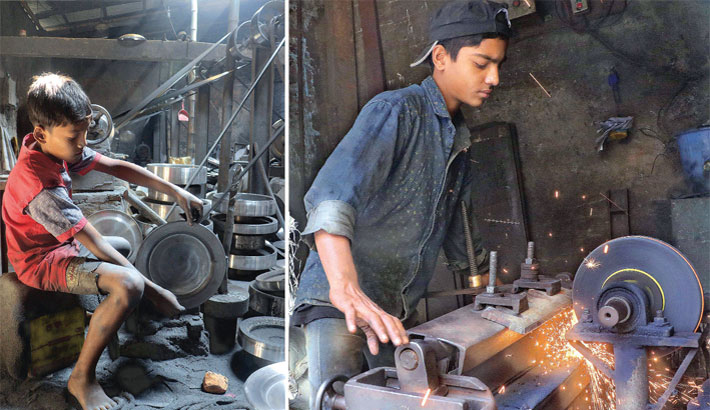 Two teenage boys are doing hazardous work at their workplaces at Madbor Bazar in Kamrangir Char of the capital on Monday. Though child labour is prohibited in Bangladesh, a section of businessmen are exploiting children by employing them in hazardous job and depriving them of their childhood. - Md nasir uddin

The child labour law is being violated at many workplaces that witness a large number of children engaged in hazardous jobs.

Sources said even many of them work for long hours in poor working condition in the factories but are low-paid and often treated badly by their supervisors or overseers.

The authorities seem to be either unaware of the issue that child labour is prohibited or deliberately have turned a blind eye to that, being the reason for the rise in the number of child labour in the country.

A Bangladesh Bureau of Statistics (BSS) report in 2003 stated that there were 3.2 million active child labourers while 1.3 million were engaged in hazardous jobs. After 10 years in 2013, the total figure of child labour was 3.45 million, with 1.28 million in hazardous jobs, an increase of around 250,000.

Among the child workers, there are 0.26 million children engaged in notified hazardous jobs. The number of child workers is 1.15 million in rural areas, 0.29 million in urban areas and 0.25 million in city corporation areas, according to the 2013 report.

There are many identified sectors of child labour in Bangladesh like tea stalls, shops, waiters in hotels, bricklayers, pulling rickshaws, farming and domestic services, etc.

The fact of the matter is that these Acts remain confined to books, papers or articles only.

In November 2016, then State Minister for Labour and Employment Mujibul Haque Chunnu declared that the government would eliminate child labour from 38 sectors categorized as hazardous by 2021, and from all sectors by 2025.

During a visit to automobile workshop, this correspondent found several children under the age of 18 working there. The child labourers told daily sun they work for more than 10 hours in the workshop.

While visiting many factories located in Kamrangirchar area on the outskirts of the capital, it was found that at least 2 to 5 children under 18 years are working in almost every factory. Even there are children between 8 and 10 years old.

Many children alleged that they have no fixed working hours. Even, they are deprived of formal education and entertainment.

Nasimul Hasan, advocacy chief of Incidin Bangladesh, told daily sun the government should take necessary initiatives to eliminate child labour. The country currently has no National Plan of Action (NPA) as the previous one expired in 2016.

He said for survival, poor families send their children to work as an extra income source for the family because the parents have no stable income to sustain their household expenditure.

“We have to ensure their (children) education from where they can earn and learn. To eliminate child labour, we need to help their family financially.”

According to the International Labour Organization (ILO), the term ‘child labour’ is often defined as work that deprives children of their childhood, their potential and their dignity, and that is harmful to physical and mental development.

It refers to work that is mentally, physically, socially or morally dangerous and harmful to children. It interferes with their schooling by depriving them of the opportunity to attend school, obliging them to leave school prematurely or requiring them to attempt to combine school attendance with excessively long and heavy work.