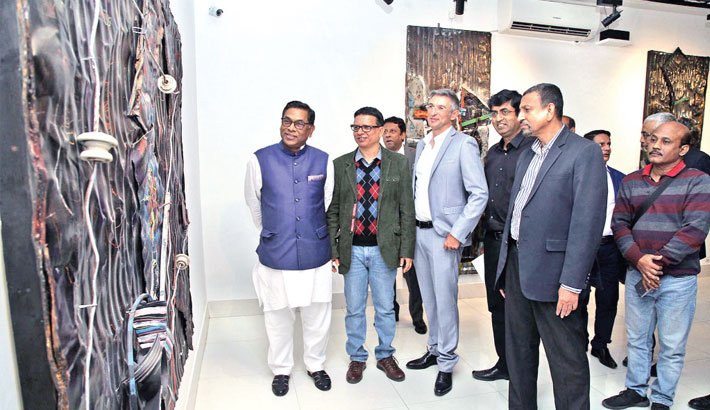 State Minister for the Ministry of Power, Energy, and Mineral Resources Mr Nasrul Hamid attended the opening ceremony as the chief guest. Architect Iqbal Habib was also present on the occasion as the special guest.

In ‘11 Gates to Visual Basics’, Kazi Salahuddin Ahmed employs trays used in road construction to carry the hot mix of asphalt. Here the object and process come together and the artwork as an object of contemplation is displaced to let the co-opted object – tin sheets recycled into tray — stand for catastrophes and their effects.

Catastrophes have an uncanny power to linger on in the social/mental sphere. However, Ahmed’s employment of a visual language developed with the used trays not only works like vassal for memory but also serve as conduit to the actual world – both man-made and natural.

In fact, the installation serves a dual purpose – it takes the viewers closer to nature and also hints at the human survival instinct linked to the idea of building. Artist forms an alignment with object with the minimum of intervention by way of markings and painted areas – they let the object retain their original character. If art is a form of mediation, ‘11 Gates to Visual Basics’ bridge the gap between the man-made and the natural. Ahmed’s new creation unpeels some of the most relevant narratives of civilisational implications. Of course, they are only hinted at by way of demonstrating how the man-made is remade to address the natural. On the question of time, this work also threads the past with the future by letting us know that things must go through mutations – that is the eternal natural cycle the work acknowledges.

Kazi Salahuddin Ahmed is a very prolific artist who has realized his first exhibition in 1987. He has already participated in many group exhibitions and carried out 28th solo exhibitions in Bangladesh and abroad, particularly in France, the United States, India, Pakistan, the United Kingdom, China, Japan, Australia,  Nepal, Iran and in Yugoslavia.