Orangutan extends a helping hand to man in river 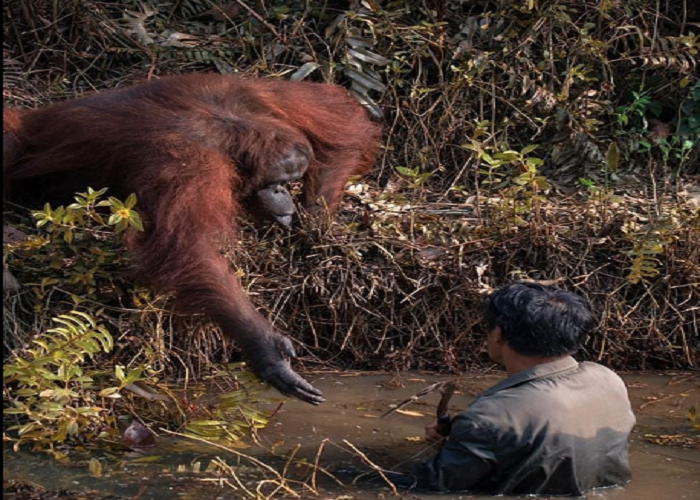 An incredible photo has captured the moment an orangutan reached out to help a conservationist who appeared to be stuck in a river. The picture was taken in a conservation forest area in Borneo as the man searched for snakes in the river to protect apes living in the area. It appears to show the orangutan offering an outstretched arm to the man who stood waist-deep in the muddy river.

According to Daily Mail, the striking image was captured by Anil Prabhakar, who was on a safari with his friends when he came across the touching scene.

Prabhakar later found that the unnamed man worked for the Borneo Orangutan Survival Foundation - an organisation that works to protect the endangered species. The foundation shared the image on Facebook Thursday, where it has struck a chord with many.

"Here, let me help you. So sweet," wrote one person in the comments section. "Quite amazing, so touching," said another.

According to Metro News, Mr Prabhakar revealed that the man actually refused the orangutan's helping hand as it is a wild animal.

"Someone told him there was a snake in the river. The warden went there and cleared the bushes," he said.

"An orangutan came to the banks and was watching what he was doing. He then came closer and gave his hand. The warden just moved away. I asked him why later and he said: 'It's a wild animal, not one we are familiar with.'"