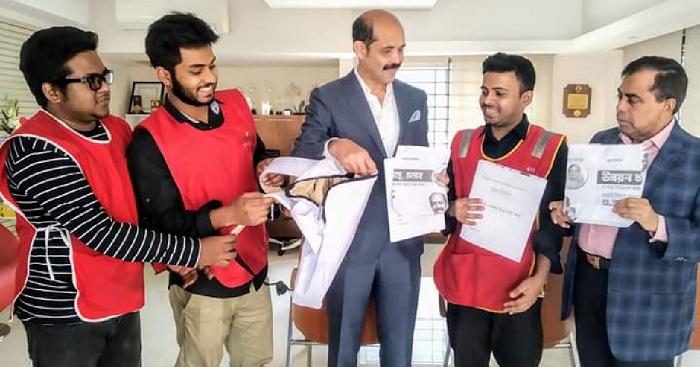 Dhaka, known as one of the unhealthy cities in the world because of several types of environmental pollution, has to suffer in almost every election- thanks to the advertisements usage in the election campaigns of the candidates. A good load of posters and banners cover the whole cityscape and after the ending of these elections, both the city corporations suffer to clean up these huge messes.

Modern problem requires modern solution- and sometimes, the solutions can shake everyone from the very core for the uniqueness of the implemented ideas and vision. Bidyanondo (Learn for Fun), an educational voluntary organization in Bangladesh, implemented that unique solution after the 2020 Mayoral election of DNCC and DSCC.

The organization is utilizing the election-wastages, through making exercise books from both the used and unused posters; and school-bags, raincoats from the pvc banners. In addition to that, they are using the plastics and ropes extracted from these laminated posters and banners, for packaging purposes.

“Right after the February 1 Mayoral elections, we (Bidyanondo volunteers) started collecting both used and unused posters and banners for the project from the Pallabi R/A, Mirpur, where our office is located. Soon after the news of our initiative went viral on Facebook, we started getting calls from councilors and three of the Mayoral candidates from both the parties,” Habibur Rahman Samrat, a spokesperson from Bidyanondo informed UNB.

“Our initial plan was to make exercise books for next one year, using these posters for our 1,000 children from our 3 orphanages and also from the street. Then after starting the process, we got massive response from everyone and now we are thinking about making some 1 Lakh exercise books from these posters. On Wednesday, we received 3 trucks full of unused posters, each truck carries 2.5 to 3 ton of weights,”  Samrat continued.

Mentioning the support the initiative received from the Mayoral candidates and councilors, Samrat told that everyone is enthusiastically collaborating in this noble project. “Especially, we got massive support from the newly elected Mayor of Dhaka North City Corporation (DNCC), Atiqul Islam. He appreciated the initiative and promised to get more involved in our other projects like this,” Samrat told UNB.

How are these exercise books, bags, raincoats, small packets of papers, bill slips etc being crafted? Samrat informed that every day, 25-30 volunteers are working continuously to make these things. Small teams of consisting 2 members are collecting posters and banners from each area. “We have a non-profit garments factory named ‘Bashonti’ beside our office, where the bags and raincoats are being crafted.”

The initiative has already gone viral on Facebook, and everyone is appreciating their noble initiative. “If there is a Nobel prize in recycling waste to good you guys must deserve it”- compliments like these are being flooded over on each of their Facebook posts.

Running entirely with the help and effort of volunteers, the foundation is known to many for its revolutionary, acclaimed idea- the ‘Ek Taka Ahar’ (1 Taka Meal) project. As the name suggests, it provides healthy meals to children under the age of 12 and older people above the age of 60, in exchange of 1 taka per meal.

Reasons behind this noble initiative and this strange exchange? According to their website, facebook page and volunteers, the main purpose and vision behind the idea was to unharm the self-respect of the unprivileged children and older people, who might have to deal with low self-esteem if they received everything free. In order to make them feel important, and most importantly, ‘buyers’ of their own meals- the idea of taking 1 taka for each meal was initiated.

In addition to that idea- Bidyanondo also initiated several other projects similar to that, including One Taka Medical Aid, One Glass of Milk, Free Academic Teaching for Underprivileged Kids, Orphanage Center, Support for Refugees, Winter Clothes Distribution, Iftaar and Sehri meals for unprivileged children and many more.

In the ongoing Ekushey Boi Mela, Bidyanondo has a book stall (Stall 77 at the Bangla Academy part of the fair) which is made using household wastages in some parts of their stall decoration. It used plastics such as bottles-caps-cups, polythene packets and even wasted cell phones. In exchange of unused-unexpired medicines and damaged cell phones and laptops, readers can buy books from the Bidyanondo stall and those medicines-phones-laptops will be used for unprivileged people in unprivileged areas across the country.

Noble initiatives like these recycling projects can definitely reduce environmental pollution and poverty on a greater scale- this is the common belief of the enthusiastic volunteers. The initiatives can be supported through donations.