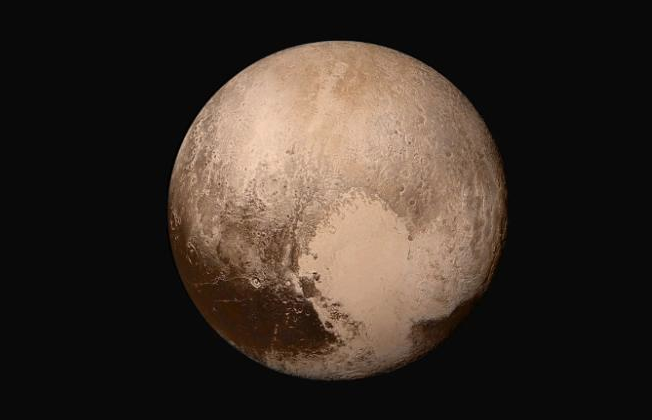 During its flyby of Pluto in 2015, NASA's New Horizons mission captured a now iconic image of a heart-shaped feature on the dwarf planet. And new research about Pluto's "frozen heart" has revealed that its "heartbeat" actually controls wind, which could sculpt the landscape on its surface.
The heart-shaped feature is known as Tombaugh Regio, named in honor of astronomer Clybe Tombaugh, who discovered Pluto in 1930. Tuesday is also Tombaugh's birthday.

Much of the dwarf planet's nitrogen ice content can be found in this region, concentrated in a deep basin called Sputnik Planitia because the elevation is 1.9 miles lower than the surface. The ice sheet spans 620 miles.
The basin makes up the "left lobe" of the heart, while the right side is home to nitrogen glaciers and highlands.
NASA's New Horizons' imager and Ralph instrument created a global view of Pluto that shows off its "heart."
"Before New Horizons, everyone thought Pluto was going to be a netball -- completely flat, almost no diversity," said Tanguy Bertrand, astrophysicist and planetary scientist at NASA's Ames Research Center and lead author of the new study. "But it's completely different. It has a lot of different landscapes and we are trying to understand what's going on there."

On Pluto, the atmosphere is about 100,000 times thinner than what we experience on Earth. Pluto's atmosphere is composed of nitrogen, carbon monoxide and methane.
In daytime, Pluto's frozen nitrogen heart warms enough to become vapor. By night, it's condensing and turning to ice again. The researchers call this Pluto's "heartbeat," which controls atmospheric circulation of nitrogen winds around the planet.
The new study published this week in the American Geophysical Union's Journal of Geophysical Research: Planets.
"This highlights the fact that Pluto's atmosphere and winds -- even if the density of the atmosphere is very low -- can impact the surface," Bertrand said.
These winds may be responsible for the intriguing features on Pluto's surface seen during the 2015 flyby.
Researchers discovered that the nitrogen wind is moving in the opposite direction of the planet's rotation. The nitrogen wind moves heat, ice grains and other particles close to the surface, like a brush leaving dark streaks across Pluto's north and northwest regions.
Using data gathered by the flyby, the researchers were able to model the nitrogen wind and weather forecast to see how it may affect the ice and landscape.
They found that Pluto's western winds are caused by the vaporizing of the nitrogen ice to the north and the formation of ice in the south. It's a unique atmosphere among the planets in our solar system, the researchers said.

The western winds occur about 2.5 miles above the surface. But closer in, the air moves quickly, creating wind patterns around the western border of the ice basin. The basin's cliffs help trap cold air, where it strengthens before passing over the region.

These regional weather patterns could provide a greater understanding of the dark streaks and plains to the west of the basin. And the researchers believe that if the winds moved in a different direction, Pluto may appear unrecognizable.
"Sputnik Planitia may be as important for Pluto's climate as the ocean is for Earth's climate," Bertrand said. "If you remove Sputnik Planitia -- if you remove the heart of Pluto -- you won't have the same circulation."