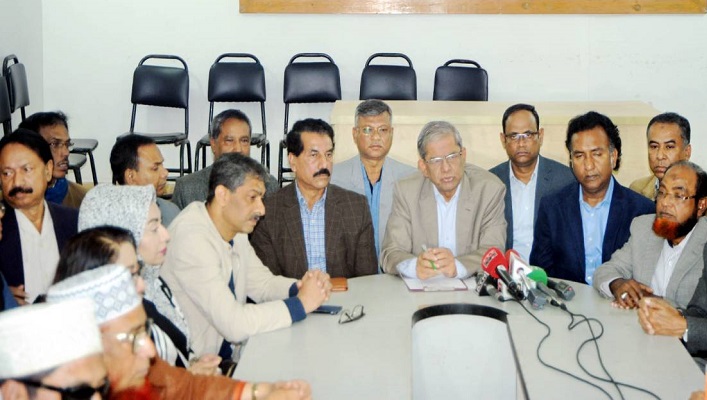 BNP on Tuesday announced a two-day programme, including a rally in the city on Saturday, demanding BNP Chairperson Khaleda Zia’s release, marking the second anniversary of her imprisonment.

As part of the programmes, he said the party will arrange doa mahfils in mosques after Jum’a prayers on Friday seeking early recovery of Khaleda as she has been suffering from various critical ailments.

Besides, BNP will hold a rally in front of its Nayapaltan central office at 2pm on Saturday. The party’s all district units will also stage demonstrations on the same day.

BNP will also publish posters and leaflets on the occasion.

“We’ve worked out these programmes at our joint meeting to push for our demand for the release of our leader (Khaleda). The government has kept her in jail unlawfully for two years and repressing her,” said Fakhrul.

He demanded the government immediately free Khaleda and ensure proper treatment of her. “We fear that the government is pushing her towards death by keeping her in jail in such a condition of her health.”

On February 8, 2018, Khaleda was sent to Old Dhaka Central Jail after a lower court sentenced her to five years’ imprisonment in the Zia Orphanage Trust graft case. The High Court later doubled her five-year jail term.

Khaleda was found guilty in another corruption case the same year, though her party claims both cases are politically motivated.

The BNP chief has been receiving treatment at BSMMU since April 1.

Khaleda is now facing around 36 cases, including Zia Orphanage Trust and Zia Charitable corruption ones.