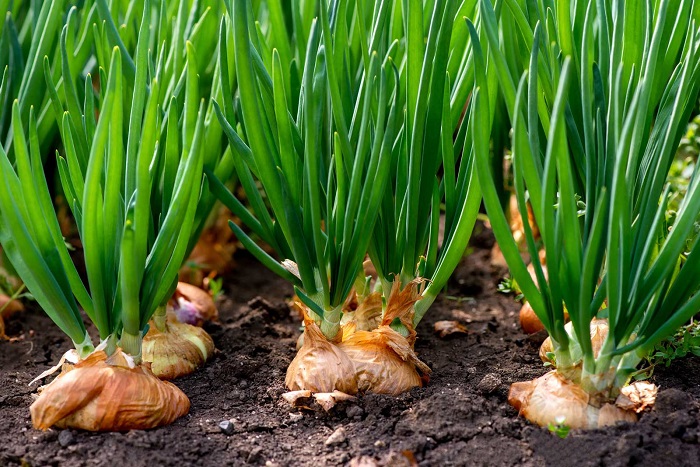 As a result of the prevailing lucrative market price, farmers are continuing transplantation of onion seedlings along with harvesting the tuber variety of the spicy crop in Rangpur agriculture region.

Officials of the Department of Agricultural Extension (DAE) said high profit has inspired farmers in cultivating onion on more land even after exceeding its fixed farming target already by 18.58 percent in the region.

The farmers have completed farming of tuber variety of onion and sowing of onion seeds last month and they are harvesting tuber varieties of onion to get lucrative price despite its abundant supply in local markets.

“The enthusiastic farmers will continue transplantation of onion seedlings till the end of this month in Rangpur agriculture region,” Deputy Director of the DAE at its regional office Agriculturist Md. Moniruzzaman told BSS today.

Earlier, the DAE had fixed a target of producing 65,185 tonnes of onion from 6,550 hectares of land for all five districts in the region this time.

“The farmers have already cultivated onion on 7,767 hectares of land, higher by 1,217 hectares or 18.58 percent than the fixed farming target,” he said, adding that more land will be brought under onion farming as transplantation of its seedlings still continues.

“Of them, farmers have already harvested tuber variety of onion on 3,283 hectares of land and produced 38,976 tonnes of the spicy crop with an excellent average yield rate of 11.87 tonnes of tuber onion per hectare of land,” Moniruzzaman said.

The early variety of harvested tuber onion has already flooded the local markets bringing down its price to some reasonable rates within Taka 75 to Taka 90 per kilogram now against Taka 140 to 180 a month ago in the region.

“We are selling the newly harvested onion at Taka 90 per kilogram though the price is less by up to Taka 20 per kilogram at farmers’ levels,” said retail vegetable trader Hafizur Rahman at Rangpur City Bazar today.

Additional Director of the DAE for Rangpur region Agriculturist Muhammad Ali said bumper onion is likely to be produced this season in Rangpur agriculture region as enthusiastic farmers are cultivating the spicy crop on more land to get lucrative prices.