History of Irrigation Development in Bangladesh 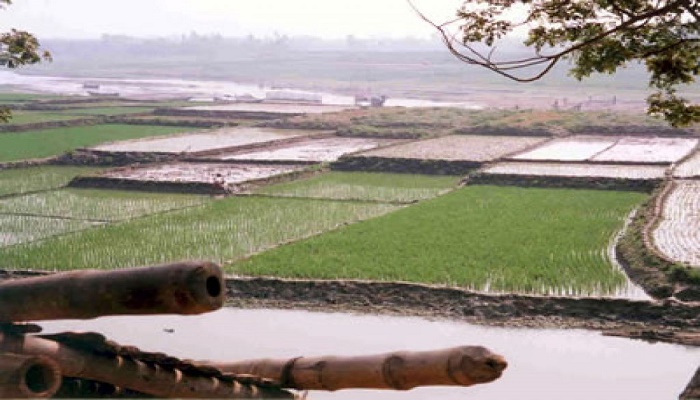 It is assumed that agriculture in the Indian subcontinent started nine thousand years ago when people learned the technique of growing crops and domesticating wild animals. Many years later, they discovered that if water from rivers can be diverted to crop fields, its production is increased tremendously. Irrigation system was developed in this way. In the first or second century, ‘Kallanai Dam’ built on the Kaveri River of Tamil Nadu, India was the first one for irrigation in the world and is still in use. The building of such an old water reservoir along with Mohenjo-Daro and Harappa proves that the Indian Civilization is one of the oldest one in the world.

After irrigation, the soil and micro-climate becomes cool, which expedites crop growth. It is relatively easier to broadcast seeds, fertilizers, pesticides, and other necessary ingredients on a crop field, but applying water for crop growth is not so easy. Therefore, it is not possible to grow any crops in vast areas of many countries of the world. Bangladesh is fortunate enough to be endowed with good rainfall and plenty of rivers for crop growth. It is believed that irrigation water was applied first time in the world six thousand years ago in Egypt, a country very famous for its old civilization. Barrages were made on the river Nile to divert water for growing crops. After making barrages, water overflows by the sides of rivers to flood the field, therefore, the system was named ‘flood irrigation’ or ‘overflow irrigation’. This system of irrigation was in practice in the Indian Subcontinent before the Sultanate time (1213 A.D.). It may be mentioned here that irrigation system was mentioned in the very old book Rig Veda, which is considered as the first book in the world. In Bangladesh, irrigation system has been practiced for more than three thousand years.

During the Sultanate time, instead of practising overflow irrigation system, ‘water reservoir irrigation’ system was introduced. In many areas, big size ponds, lakes etc. were made to preserve rain and flood water. Embankments were made on river banks for controlling flood and canals for draining excess water from crop fields. In addition, roads, bridges and culverts were made for improving communication system. Also programmes were taken for dredging rivers. All of those contributed greatly in agriculture, communication and overall development of the country. At that time, Bangladesh was a very wealthy country. This kind of irrigation system was continued up to the end of the Sultanate Regime (1757). During the British Regime, those kinds of development were closed and efforts were made to improve the water transportation system which brought disaster in agriculture.

After gaining independence from the British, the construction of the first big irrigation project Ganges-Kobadak (G-K) was started in 1954-55 financial year. Its first phase was completed in 1962-63. After the establishment of the Bangladesh Water Development Board (BWDB) in 1959, Dhaka-Narayanganj-Dhaka (DND) project, Thakurgaon Deep Tubewell (DTW) project, Low Lift Pump (LLP) project and Buri Teesta project were implemented in addition to the G-K project, which made epoch-making changes in agriculture. Bangladesh Agricultural Development Corporation (BADC) was established in 1962 to supply all the inputs for agricultural production. After its establishment, in addition to supplying seeds, fertilizers and pesticides, installation of LLPs and DTWs was strengthened to provide irrigation throughout the country. To attain self-sufficiency in food production, BADC strengthened its programme of expansion of irrigated area in 1971-72 through shallow tubewell (STW) irrigation system along with LLP and DTW irrigation system. As a result of this expansion, food grain production of the country increased as per population increase.

In the middle of the 1960s, United Nations International Children’s Emergency Fund (UNICEF) distributed hand tubewells (HTW) in the rural areas for supplying potable water. Toward the end of that decade, the cultivation of irrigation-dependent high yielding variety (HYV) rice IR-8 started in a limited area. At that time STW was not introduced and DTWs were installed only in Thakurgaon and Cumilla districts. Many farmers of different areas having HTWs started irrigating their rice fields in addition to using the water for domestic purpose and got very good result. After observing that success of rice production, BADC had installed two lakh HTWs for irrigation. BWDB had also installed the same number of HTWs. At the same time, a few non-government organizations (NGO) distributed HTWs and hand and pedal operated Rower Pumps, Treadle Pumps, Diaphragm Pumps, etc. among farmers. During the financial year 1973-74, the country faced serious shortage of food; therefore, price of rice was exorbitantly high. Use of those tubewells increased to irrigate rice and vegetable crops. Later when STWs were introduced, manually operated HTWs slowly ceased. In 2002-03, only 0.11 per cent of the total irrigated area was under HTWs and it is assumed that its contribution in irrigation has reduced further.

The Local Government Engineering Department (LGED) has been working on small scale water resources development since 1960s. The department has contributed significantly in agriculture through creating employment of landless farmers and ultra-poor men and women in rural areas by implementing flood control, drainage and irrigation projects. The department had constructed two rubber dams in Cox’s Bazar in 1995, the first time in the country, with the help of Institute of Water Resources and Hydropower Research (IWHR), China. Synthetic fibre-made inflated rubber pipes are used to make dams on small rivers to divert water for irrigating boro rice. After that time, BWDB and BADC are building rubber dams for irrigation.

The installation of DTWs in the country started in the middle of 1960’s and that for STWs in the early 1970’s. In the early 1990’s the number of DTWs was the highest, after that its number started decreasing. Because of liberal import policy toward the end of the 1980s, the prices of STWs became affordable to small and medium farmers. Therefore, its number started increasing at a rapid rate. Any farmers can buy water for cash or kind. Use of manual pumps almost came to an end. On the contrary, to operate DTWs, it is necessary to form farmer’s group. Because of disagreement among group members, increase of operation and maintenance cost, management problems, etc., many DTWs are inoperative. As the price of a DTW, having four times capacity of a STW, is generally eight to ten times, no farmer has installed any DTW for irrigation.

Before the introduction of mechanized irrigation system, Bangladesh was a food-deficit country with less than half of present population. As the irrigation coverage area has increased to 72 per cent of the cultivable area, the country is producing sufficient rice for 160 million people. This indicates the importance of irrigation for food production. Groundwater is used for irrigating 77 per cent of the total irrigated land. As a consequence of too much dependence on groundwater for irrigation, domestic and other uses, in many areas of the country, more water is exploited than annual recharge by rainfall and rivers. Too much exploitation of groundwater has an adverse effect on the environment, therefore, emphasis has been given to use more surface water for irrigation and reduce groundwater use. Government organizations are working on re-excavation of canals, ponds, creeks, etc., construction of rubber dams on small rivers, reservation of rain and river water, etc. As a result of all these activities, the share of surface water in irrigation has increased in recent years.