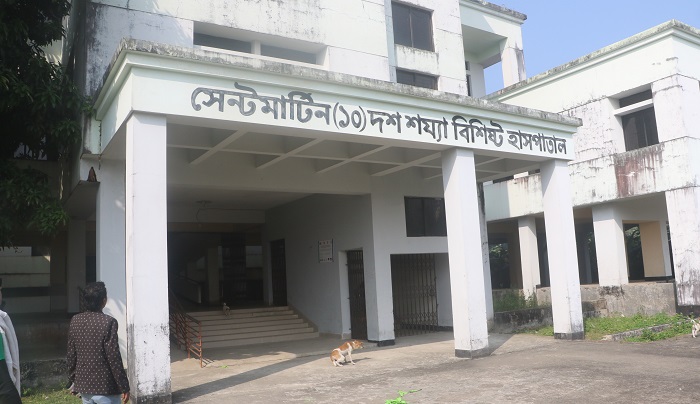 The 10-Bed Hospital in the popular offshore tourist destination Saint Martin’s Island is nothing but a name as the residents and the visitors are routinely deprived of healthcare services in there.

Sources said due to lack of a full-fledged hospital, some 13,000 people living in the island, some 95 kilometre off the beach city Cox’s Bazar, struggle a lot to avail themselves of healthcare from elsewhere.

Besides, some 10 to 15 lakh visitors throng the tourist attraction every year and an emergency appears to be a fatal blow to them.

To provide healthcare services to the huge number of people, the government established the 10-bed hospital on the island on February 9 in 2008.

But the staff left the hospital a few days after their appointment and none was hired for the vacant posts, said sources.

Among the physicians, Dr Mohammad Ahnaf Chowdhury is alleged to be very irregular in the hospital while Dr Romana Rashid remains virtually absent.

Tourist Ruhul Amin said one of his friends fell sick while visiting the island recently. He was rushed to the local hospital where he didn’t get medical attention by any expert physician.

“We had to pass the night amid anxiety and the patient was taken to Teknaf by a speedboat on the following morning,” said Ruhul.

Hotelier Haider Ali said patients have to be taken to Teknaf by speed boat or trawler in case of any emergency.

The situation puts the patients and their relatives in great trouble, he said.

The physicians are available for two to four days a week during the tourism season, said the businessman.

Despite making repeated allegations no step was taken to address the crisis, added Haider.

Local Union Parishad Chairman Nur Ahmed observed that it is very difficult to receive healthcare services from Teknaf Upazila Health Complex, some 34 kilometres off the island.

The situation turns worse during the rainy season and some patients die due to lack of having any ambulance-boat on the island, he alleged.

An official of Cox’s Bazar Civil Surgeon Office said service holders don’t want to stay in the Island for a long time as the hospital was not launched as a full-fledged one.

The residential facilities developed for the physicians and nurses became unusable due to lack of power and drinking water, he said.

“So, indoor services could not be introduced. The patients now get the emergency and outdoor services,” he said.

“Some three to four patients come to the hospital every day on average and there is no alternative but to provide them with primary healthcare services,” he said.

However, despite repeated attempts another physician Dr Romana Rashid couldn’t be reached over phone for comment.

There is no supply of power and water at the residences of the physicians and it creates reluctance among them to stay there, he said.

Contacted, Cox’s Bazar Civil Surgeon Dr Mahbubur Rahman said they have already talked with the high-ups regarding the matter and hope to get the problems solved shortly.